Ghost crabs growl with teeth in their stomachs when agitated • Earth.com 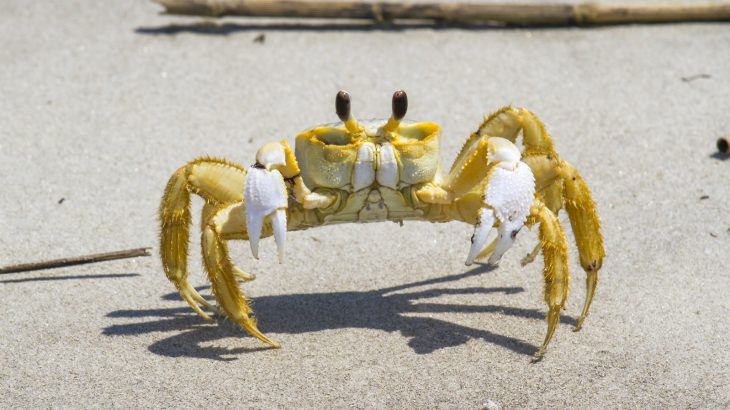 Ghost crabs growl with teeth in their stomachs when agitated

Researchers at the Scripps Institution of Oceanography have discovered that Atlantic ghost crabs can make angry growling sounds in their stomachs when they feel threatened. The sound is produced by a structure called the gastric mill, which is also used to break down food.

Stridulation sounds are made when creatures rub two body parts together, like when crickets chirp to attract mates. Scientists had previously determined that crabs can communicate through stridulation as well by rubbing their legs or specialized ridges on their claws together.

However, study lead author Jennifer Taylor observed ghost crabs that were mysteriously making sounds while neither their legs or claws were moving.

To investigate, Taylor teamed up with Damian Elias at UC Berkeley and used lasers to pinpoint areas of the crab that could be producing the sounds. After analyzing the sound signature, the researchers confirmed that the noise was coming from the gastric mill, a three-pronged structure that grinds up food like teeth.

“The first time I heard the rasp, I couldn’t believe how clear the sound of stridulation was, even though the crab’s claws were outstretched and clearly not producing sound,” said study co-author Maya S. deVries.

Taylor and deVries performed fluoroscopies on the ghost crabs by feeding them fluoro bromide, a blue liquid that moves through the body and dyes the organs. “For this approach to work, we had to get the crabs to ingest the dye,” said Taylor. “We eventually succeeded and were able to see the gastric mill teeth in the x-ray.”

The researchers observed the crabs using the gastric mill to produce the stridulation noises when they were agitated. According to the researchers, it is possible that other crabs are using the same form of communication.

“All crabs have a gastric mill and the capacity to communicate with sound,” said Taylor. “It will be interesting to see how our understanding of crustacean communication unfolds.”