Giant bird lived alongside early Europeans millions of years ago • 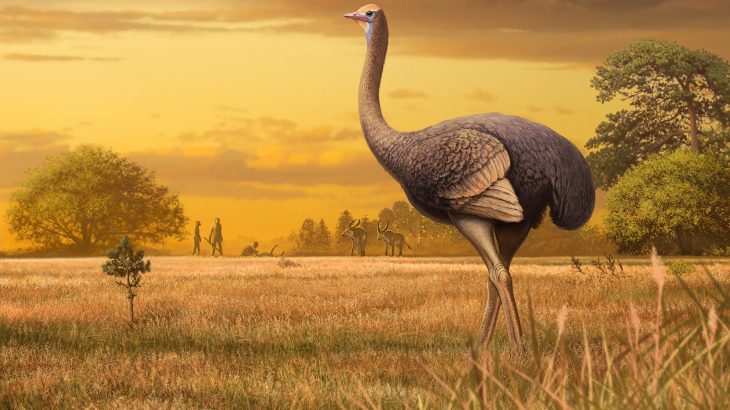 Giant bird lived alongside early Europeans millions of years ago

Researchers from the Russian Academy of Sciences recently unearthed a fossil belonging to a behemoth of a bird in a cave in Crimea.

Although megafauna were not strangers to the prehistoric era, it was thought that huge birds were isolated to Madagascar, New Zealand, and Australia.

This newest fossil, though, indicates that birds similar in size to the Madagascan elephant bird lived in Europe, and it’s the first bird of its size ever discovered in the northern hemisphere.

The researchers detailed the find in a study in the Journal of Vertebrate Paleontology.

Found in the Taurida Cave in Crimea along the northern coast of the Black Sea, the researchers estimate that the bird measured a little over 11 feet tall.  Other fossils found in the cave helped date the bird to 1.5 to two million years old.

It would have been flightless but very fast, as indicated by its thin femur bone, and may have been an important source of meat for humans. Giant bird lived alongside early Europeans millions of years ago

“When I first felt the weight of the bird whose thigh bone I was holding in my hand, I thought it must be a Malagasy elephant bird fossil because no birds of this size have ever been reported from Europe,” said Dr. Nikita Zelenkov, the lead author of the study. “However, the structure of the bone unexpectedly told a different story.”

“We don’t have enough data yet to say whether it was most closely related to ostriches or to other birds, but we estimate it weighed about 450kg,” said Zelenkov. “This formidable weight is nearly double the largest moa, three times the largest living bird, the common ostrich, and nearly as much as an adult polar bear.”

Alongside the bird, the researchers found fossils of giant cheetahs and saber-tooth cats.

“The Taurida cave network was only discovered last summer when a new motorway was being built,” said Zelenkov. “Last year, mammoth remains were unearthed and there may be much more to that the site will teach us about Europe’s distant past.”