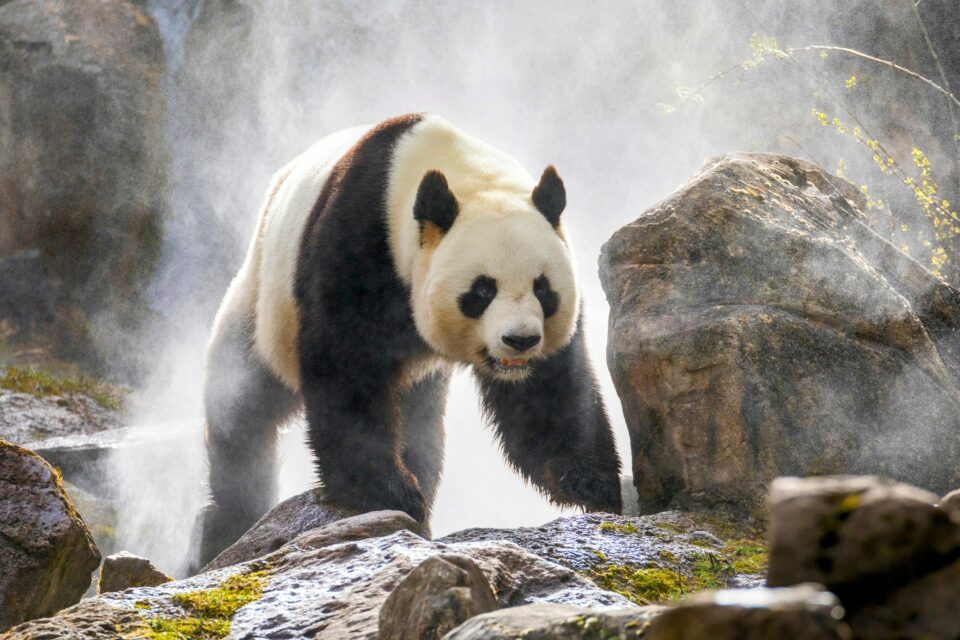 Mammals in general are not able to digest cellulose, the carbohydrate that is found in the cell walls of plant cells. Even herbivores, such as cows, horses and elephants do not produce the enzyme that breaks down cellulose. Instead, mammals (including humans) need gut microbes to carry out this function and enable them to access the nutrients found inside plant cells.

Giant pandas (Ailuropoda melanoleuca) are unusual because they are bears, in the order Carnivora, but their diet consists entirely of bamboo leaves and shoots. Carnivores have short gastrointestinal tracts, geared for digesting animal flesh, and this makes the herbivorous diet of giant pandas even harder to process efficiently. Pandas are thus heavily dependent on the microbes in their guts for breaking down cells in leaves and shoots to make the contents available.

In the wild, pandas feed on fibrous old bamboo leaves for eight months of the year. This diet is poor in nutrients and contains almost no fat. However, during late spring and early summer the bears feed on new shoots that have a higher nutritional value that enables them to gain weight.

Previous research has shown that the gut microbiome of giant pandas changes between the leaf-eating season and the shoot-eating season. However, there has been no research on the effects of these seasonal changes on the body characteristics or physiology of the pandas.

A study published today in the journal Cell Reports addresses this gap in current understanding and finds that shifts in the gut microbes enable pandas to gain weight and store fat when bamboo shoots are available to eat.

“This is the first time we established a causal relationship between a panda’s gut microbiota and its phenotype,” said study first author Guangping Huang from the Chinese Academy of Sciences. “We’ve known these pandas have a different set of gut microbiota during the shoot-eating season for a long time, and it’s very obvious that they are chubbier during this time of the year.”

The team of scientists, led by Fuwen Wei at the CAS Institute of Zoology, has been studying wild giant pandas living in the Qinling Mountains in central China for decades. The team collected fecal samples from eight adult pandas during the leaf-eating season (14 samples) and the shoot-eating season (15 samples). These were assessed for the presence and numbers of different types of gut microbes.

Wei says that these wild pandas have distinctly different populations of gut bacteria in the two seasons. In particular, a significantly higher abundance of a bacterium called Clostridium butyricum is present in the gut during the shoot-eating season compared with during the leaf-eating season. Gas chromatography-mass spectrometry of the short-chain fatty acids in the feces also revealed that the fatty acids butyrate and acetate were present in greater amounts during shoot-eating season.

Although bamboo leaves and shoots contain almost no fat, pandas were able to gain weight and store fat when they preferentially ate shoots. The bacterium C. butyricum produces the fatty acid butyrate as a product of its metabolism in the gut of the pandas, and the scientists were interested in the effects of this fatty acid on panda metabolism.

To investigate whether the change in gut microbiota could affect a panda’s metabolism, the researchers performed a fecal transplant of panda feces, collected in the wild, to the intestinal tracts of germ-free mice. They introduced fecal matter from panda donors during the leaf-eating season into some mice, while other mice received feces collected from pandas during the shoot-eating season. A third group of mice – the control group – received no panda fecal matter.  Then they fed the mice for 3 weeks with a bamboo-based diet that simulated what pandas eat.

The experts found that mice transplanted with panda feces collected during shoot-eating season gained significantly more weight and had more fat after 21 days than mice transplanted with feces from leaf-eating season, despite consuming the same amount of food. Further analysis revealed that the fatty acid butyrate, a metabolic product of C. butyricum, could upregulate (enhance) the expression of a gene called Per2, which increases lipid synthesis and storage. Thus, the mice showed the same patterns of seasonal weight gain as the pandas do, indicating the critical role of the gut microbiome in panda metabolism.

Fat storage is important in many animals that eat a nutrient-poor diet. The bamboo eaten by pandas in the wild is deficient in fat but the shoots, eaten in late spring and early summer, contain higher levels of protein and carbohydrate. The gut bacteria in these mammals enables them to use the protein and additional carbohydrates in the shoots, to synthesize lipids that are then available for storage.

Many animals experience a seasonal shift in gut bacteria as a result of changes in food availability. For example, certain species of monkeys have different gut microbiota in summer, when they eat fresh leaves and fruits, compared with that in winter, when they feed on leaves and tree bark. A similar shift has also been observed in the digestive systems of Hadza people, modern hunter-gatherers living in Tanzania, as the type of available food changes through the year.

The researchers plan to investigate and map out more microorganisms in the panda’s gut in future, and to find out how they affect the animals’ health. “Causal research of host phenotype and gut microbiota in wild animals is just beginning. Identifying what bacteria are beneficial for animals is very important, because one day we may be able to treat some diseases with probiotics,” said Huang.