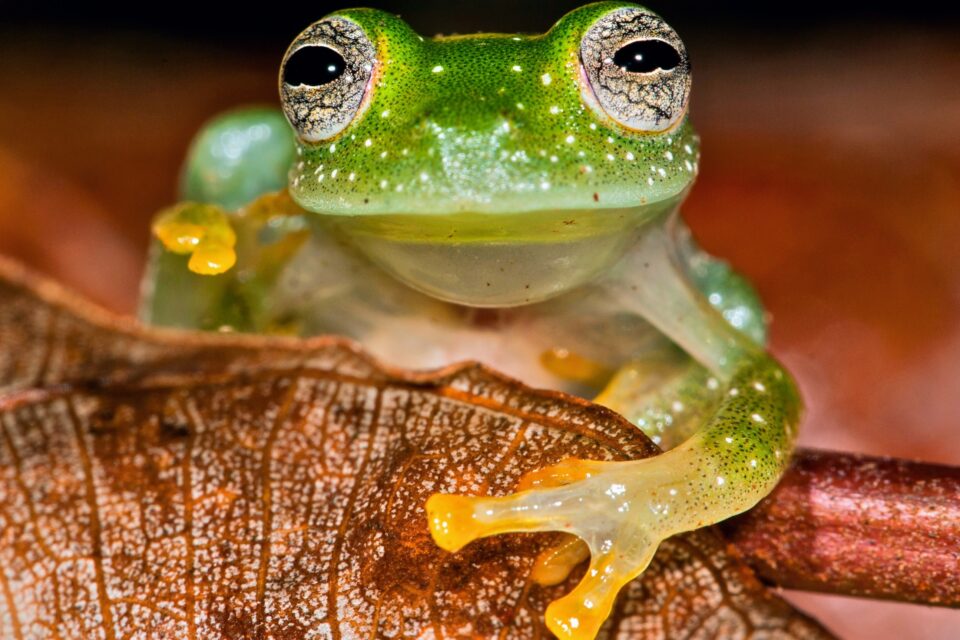 Researchers at Duke University have discovered that glassfrogs make themselves transparent by hiding most of their red blood cells in their liver. According to the experts, this strategy allows the frogs to attain transparency when they are the most vulnerable.

“There are more than 150 species of known glassfrogs in the world, and yet we’re really just starting to learn about some of the really incredible ways they interact with their environment,” said study co-lead author Jesse Delia.

“Transparency in animals is a complex form of camouflage involving mechanisms that reduce light scattering and absorption throughout the organism,” wrote the study authors.

“In vertebrates, attaining transparency is difficult because their circulatory system is full of red blood cells (RBCs) that strongly attenuate light. Here, we document how glassfrogs overcome this challenge by concealing these cells from view.”

The northern glassfrog Hyalinobatrachium fleischmanni is only a few centimeters in length and is most active at night, when the frogs are better able to blend with the surrounding landscape. During the day, glassfrogs become transparent to protect themselves while they sleep.

“When glassfrogs are resting, their muscles and skin become transparent, and their bones, eyes and internal organs are all that’s visible,” said study co-first author Carlos Taboada. “These frogs sleep on the bottoms of large leaves, and when they’re transparent, they can perfectly match the colors of the vegetation.”

The researchers explained that in vertebrates, attaining transparency is difficult because their circulatory system is full of red blood cells that strongly attenuate light. Glassfrogs are some of the only terrestrial vertebrates that can achieve transparency.

“If these frogs are awake, stressed or under anesthesia their circulatory system is full of red blood cells and they are opaque,” explained Delia. “The only way to study transparency is if these animals are happily asleep, which is difficult to achieve in a research lab. We were really banging our heads against the wall for a solution.”

“Using photoacoustic imaging to track RBCs in vivo, we show that resting glassfrogs increase transparency two- to threefold by removing ~89% of their RBCs from circulation and packing them within their liver,” wrote the study authors.

Photoacoustic microscopy (PAM) involves shooting a safe laser beam of light into tissue, which is converted into sound waves to create biomedical images of the molecules.

“PAM is the ideal tool for non-invasive imaging of red blood cells because you don’t need to inject contrast agents, which would be very difficult for these frogs,” explained Professor Junjie Yao.

“The red blood cells themselves provide the contrast, because different types of cells absorb and reflect different wavelengths of light. We could optimize our imaging systems to specifically look for red blood cells and track how much oxygen was circulating in the frog’s bodies.”

“The primary result is that whenever glassfrogs want to be transparent, which is typically when they’re at rest and vulnerable to predation, they filter nearly all the red blood cells out of their blood and hide them in a mirror-coated liver – somehow avoiding creating a huge blood clot in the process,” said study co-author Sönke Johnsen. “Whenever the frogs need to become active again, they bring the cells back into the blood stream, which gives them the metabolic capacity to move around.”

The researchers said that this process raises questions about how the frogs can safely store almost all their red blood cells in their liver without clotting or damaging their peripheral tissues. They noted that one potential next step is to study this mechanism and how it could one day apply to vascular issues in humans.

“Our successful collaboration has been a great example of how multiple disciplines can jointly advance science in the most synergistic way,” said Professor Yao. “We are extremely excited about the future interactions between the biology and engineering teams. With all the strength on board, the sky is the limit.”