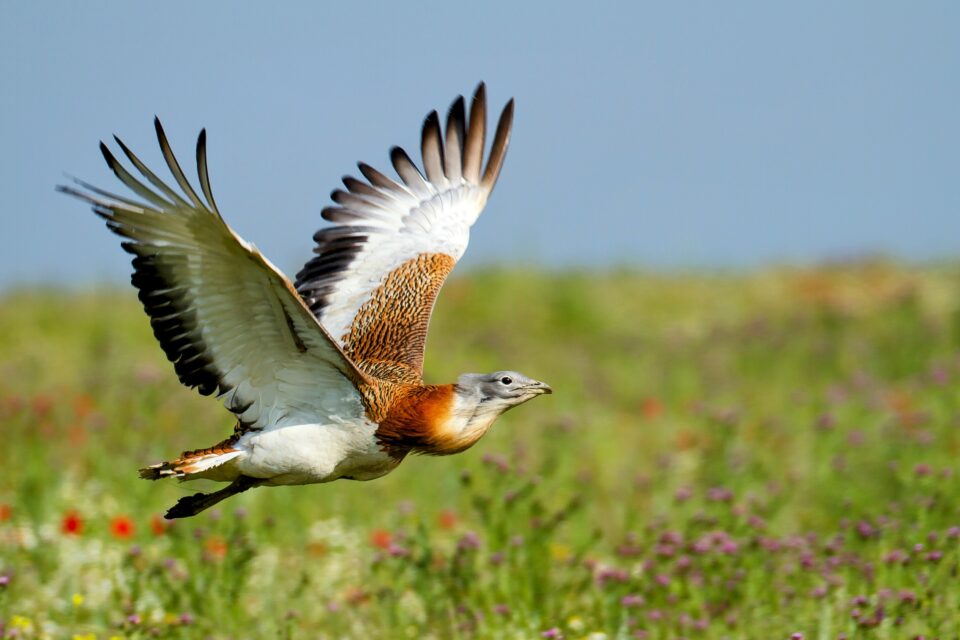 Great bustards (Otis tarda) are the heaviest birds living today, with the greatest size difference between the sexes. They are also so-called “lek breeders,” with males gathering at chosen sites to put on a spectacular audiovisual show for the visiting females, who choose their mates based on their appearance and quality of their showbirdship. However, males need exceptional stamina during the mating season, which often lowers their immune defenses and makes them highly vulnerable to various pathogens.

Now, a study published in the journal Frontiers in Ecology and Evolution has found that these impressive birds often actively seek out two plants with compounds that can kill pathogens. Thus, they may be a rare example of a bird which is capable of self-medicating against disease.

“Great bustards seek out two species of weeds that are also used by humans in traditional medicine. We show that both contain antiprotozoal and nematicidal (i.e., worm-killing) compounds, while the second also contains antifungal agents,” added co-author Azucena Gonzalez-Coloma, a researcher at the Institute of Agricultural Sciences in Madrid.

Since the early 1980s, the scientists collected a total of 623 droppings from female and male great bustards, including 178 during the April mating season, and counted the abundance of recognizable remains of 90 plant species that grow locally in the Madrid and Castille-Leon regions in Spain and are known to be on the bustards’ menu.

The analysis revealed that two plant species are eaten by these birds more often than expected: corn poppies (Papaver rhoeas) and purple viper’s bugloss (Echium plantagineum). “Great bustards select corn poppies and purple viper’s bugloss mainly in the mating season, in April, when their energy expenditure is greatest. And males, who during these months spend much of their time and energy budgets on sexual display, prefer them more than females,” Bautista-Sopelana explained.

The first plant species is usually avoided by cattle and is used in traditional medicine as a pain reliever, sedative, and immune booster. The second one is toxic for humans and cattle if eaten in large quantities. However, both have nutritional and, particularly, anti-parasitic value. By testing the activity of compounds found in these plants against three common parasites of birds (the protozoon Trichomonas gallinae, the nematode Meloidogyne javanica, and the fungus Aspergillus niger), the scientists found that they are highly effective at inhibiting or killing protozoa and nematodes in vitro, while purple viper’s bugloss is also moderately active against fungi.

However, more research is needed – including the design of experimental protocols in biomedical, veterinary, and pharmacological sciences – to better understand birds’ capacity to self-medicate. “Until then, we continue with our fieldwork. For example, quantifying the prevalence of remains of corn poppies and purple viper’s bugloss and pathogens in fecal droppings across different populations of great bustards could falsify our hypothesis of self-medication in this species,” Batista-Sopelana concluded.