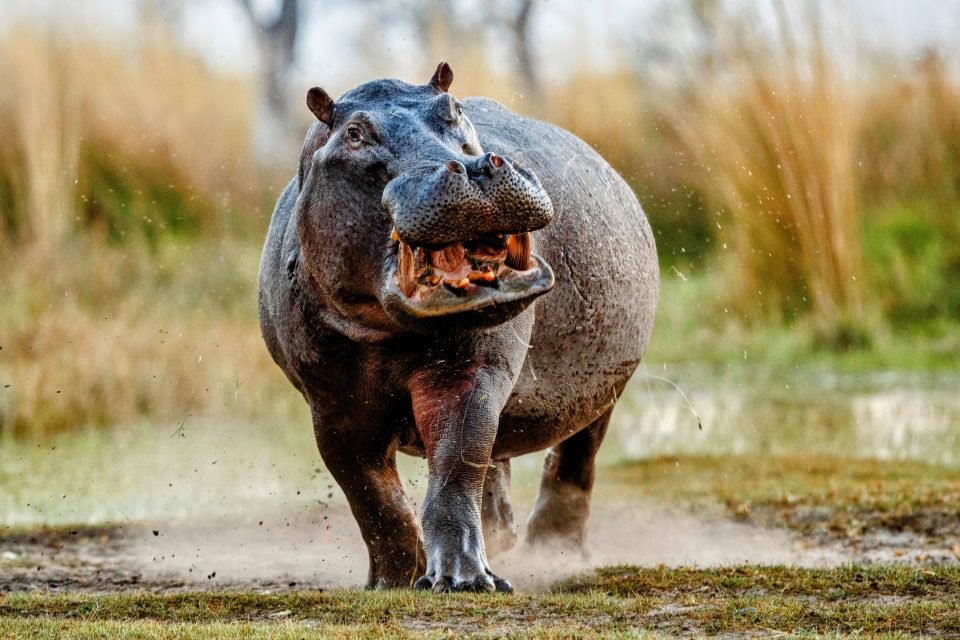 The unique skin adaptations of hippos and whales did not come from a common ancestor, according to a new study from the American Museum of Natural History. The researchers found that even though hippos and whales are close relatives, their nearly hairless skin evolved independently.

“How mammals left terra firma and became fully aquatic is one of the most fascinating evolutionary stories, perhaps rivaled only by how animals traded water for land in the first place or by the evolution of flight,” said study co-author John Gatesy.

“Our latest findings contradict the current dogma in the field – that relatives of the amphibious hippo might have been part of the transition as mammals re-entered life in the water.”

Fully aquatic cetaceans, including whales, dolphins, and porpoises, share a common ancestor that lived about 55 million years ago. They also share some characteristics that are not common among mammals, such as giving birth underwater and lacking most of their hair.

Since these traits are rarely found in other mammals, it would seem that they were already present in the common ancestor of hippos and cetaceans.

The experts set out to determine whether hippos and cetaceans developed adaptations for an aquatic lifestyle independently, or if they inherited these traits from an amphibious ancestor.

“The simplest hypothesis is that the ancestor of whales and hippos was already amphibious, but evolution isn’t always the shortest distance between two points,” said study lead author Professor Mark Springer of UC Riverside.

To investigate, the researchers focused on the animals’ skin, which changed dramatically in response to life in the water.

“When a group of animals becomes aquatic, skin becomes much more streamlined and uniform throughout,” said study co-author Maksim Plikus.

“Complex derivatives like hairs, nails, or sweat glands are no longer needed, and in fact, can become a hinderance to life under water, so those go away. And it loses the barrier function performed by the outer layer of skin, which in terrestrial mammals, is vital to keeping water from evaporating out of the body and preventing pathogens from getting in.”

The researchers used genetic screening to compare the anatomy of hippo and cetacean skin, and assembled a list of “skin genes” that have been deactivated in both groups. The team also assembled the first genome sequence of the pygmy hippo, one of only two living hippo species.

“When you look at the molecular signatures, there is a striking and clear answer,” said study co-author Michael Hiller. “Our results strongly support the idea that ‘aquatic’ skin traits found in both hippos and cetaceans evolved independently. And not only that, we can see that the gene losses in the hippo lineage happened much later than in the cetacean lineage.”

The genetic differences are reflected in the skin itself. For example, cetaceans only have a few whiskers, while hippos are fully whiskered.

In addition, hippos have a specialized sweat gland that whales do not possess. The sweat gland produces “blood sweat,” an orange-colored substance that is believed to have natural antimicrobial and sunscreen properties. Furthermore, cetacean skin is much thicker than hippo skin.

“These differences are fully consistent with the record of evolutionary history that is written in their genomes, which shows the independent knockout of skin genes on the cetacean lineage and on the hippo evolutionary line,” said Professor Springer. “None of the inactivating mutations that would have suggested a common aquatic ancestry are shared between these two lineages.”