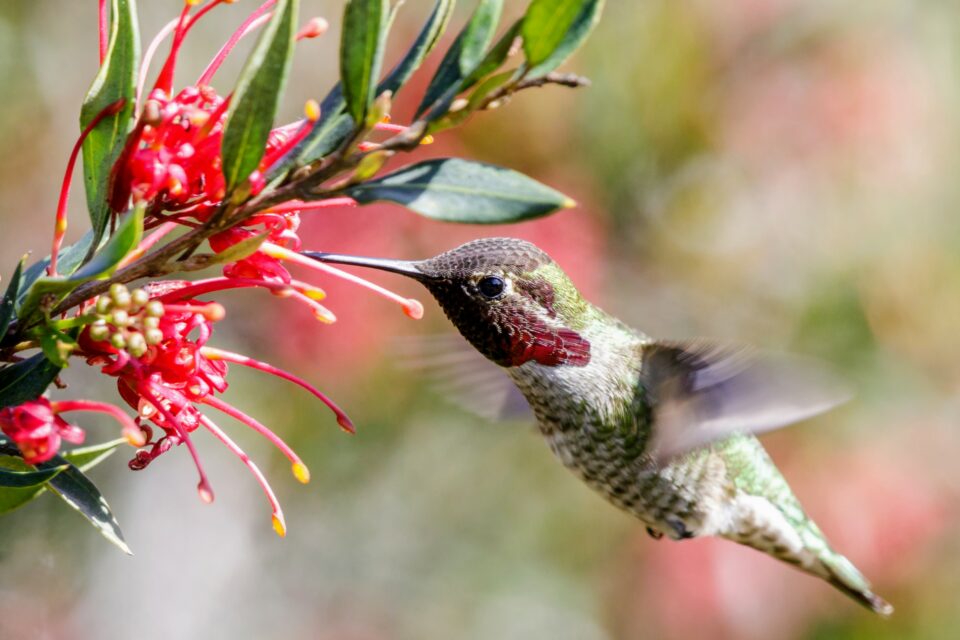 As global warming brings higher temperatures to ecosystems around the world, it is likely that some animal species will need to move to cooler areas in order to remain functional. This could mean moving towards higher latitudes or towards higher altitudes. The problem with moving up a mountain side, however, is that it brings a decrease in oxygen availability along with the cooler temperatures. For animals with high metabolic rates, such as hummingbirds, this combination of factors may make life at high altitudes impossible.

To find out what the impact of higher altitude living is on Anna’s hummingbirds (Calypte anna), Austin Spence from the University of Connecticut, USA, and Morgan Tingley from the University of California, Los Angeles, USA, transported some of these birds to sites at various heights up mountainsides. The birds occur naturally over a range of altitudes, from sea level to around 2,800 meters, so the researchers predicted that the birds would show a range of adaptations to living at altitude, and that those already comfortable at 2,400 meters would cope better when transported to 3,800 meters.

Using net traps, the researchers trapped hummingbirds from sites of different altitudes ranging from 10 metersabove sea level (Sacramento, CA) up to 2,400 meters (Mammoth Lakes, CA).  Spence and team member Hannah LeWinter of Humboldt State University then transported the birds to an aviary in western California at an altitude of 1,215 meters. The birds were given a few days to acclimatize in these new conditions.

The scientists then measured their oxygen consumption by enticing each bird to insert its head into a tiny funnel to sip a sugary solution. The consumption of O2 indicates metabolic rate since oxygen is used to produce the energy that is used during metabolism. Spence and LeWinter also measured each hummingbird’s carbon dioxide (CO2) production overnight, which is also a measure of metabolic rate.

After collecting this data, the birds were moved again, this time to aviaries at a nearby research station close to the peak of Mount Barcroft, CA, which is at an altitude of 3,800 meters. At this site there is around 39 percent less oxygen in the air and the ambient temperatures are around 5°C lower. After acclimatizing for four days, the birds’ metabolic rates were again measured while they hovered and while they slept.

Their results, published today in the Journal of Experimental Biology, show that the hummingbirds exhibit a 37 percent decrease in metabolic rate at an altitude of 3,800 meters. Instead of working harder to hover in the thin air, 1,000 meters above their natural range, the birds suffered a large drop in their metabolic rates. And the energy used by birds that had originated at higher altitudes was no different from the energy used by those that had lived close to sea level – they all struggled equally on the mountain top.

In addition, the birds fell into a state of deep torpor each night, when they slept. This is a form of overnight hibernation, where the metabolic rate is lowered significantly in order to conserve energy. Although the birds showed this behavior at the lower experimental altitude (1,215 meters), it was more extreme in the colder conditions at 3,800 meters. Here they were torpid for more than 87.5 percent of the chilly, high-altitude night.

“It means that even if they’re from a warm or cool spot, they use torpor when its super-cold, which is cool,” said Spence.

The researchers hypothesized that hummingbirds originally from higher altitude habitats may have larger lungs to compensate for the lower oxygen availability in the air at those sites, but this was not so. However, these birds did have larger hearts, which would help to circulate oxygen more rapidly around their bodies.

Unfortunately, the results from this experimental research indicate that hummingbirds will probably not be able to relocate up mountainsides to find more suitable environments as climate change makes conditions uncomfortable for them.

“Our results suggest lower oxygen availability and low air pressure may be difficult challenges to overcome for hummingbirds,” said Spence, meaning that the birds will instead have to shift northward or southward in search of cooler climes.