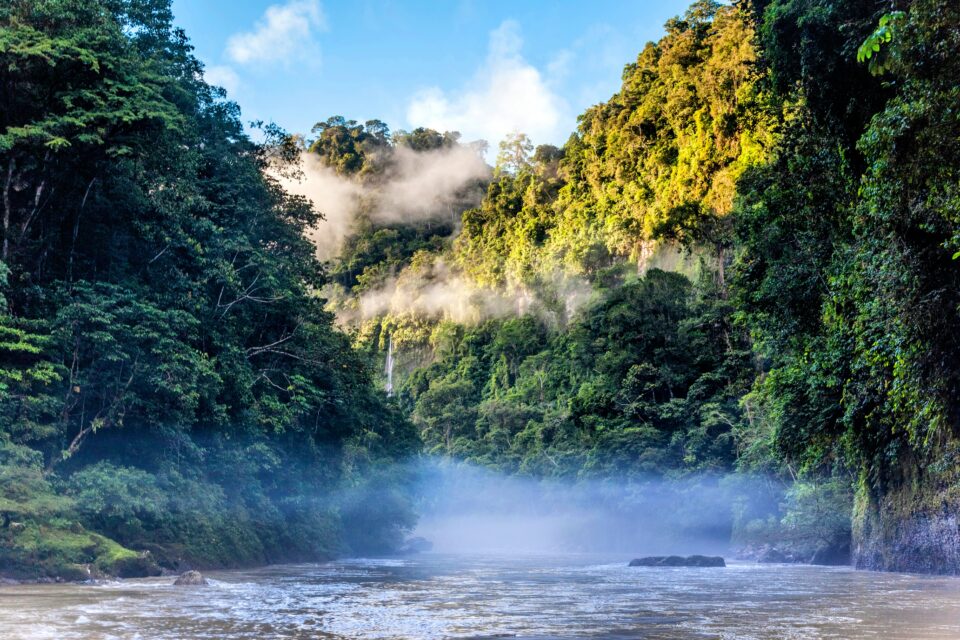 Small-scale artisanal gold mining provides an important income for local communities in the Peruvian rainforest, as in many other locations around the world. The miners collect river sediments and then use mercury to bind together the particles of gold present in these sediments. This process forms a pellet of gold large enough to be caught in a sieve and thus separated from the matrix of river sands.

The use of mercury in this process pollutes the river water with this toxic, heavy metal and impacts the associated aquatic ecosystems. Studies have investigated the impacts and spread of river pollution in the past, and exposed the dangers of this practice.

Now, a team of researchers led by Duke University has collected the first data from the Peruvian rainforest on terrestrial deposits of atmospheric methylmercury, the most toxic and dangerous form of mercury.

Atmospheric mercury is released when the pellets of gold are heated in open fire ovens in order to separate out the gold. The gold melts, while the mercury vapor goes into the atmosphere along with particles of smoke. This smoke settles on the leaves of trees and usually ends up being washed into the soil by rainfall, or absorbed directly into the tissues of the leaves.

In order to quantify the levels of mercury around gold mining sites in an area of the Peruvian rainforest, Gerson and colleagues collected samples of air, leaf litter, soil and green leaves from the tops of trees – these were obtained using a huge slingshot. Their samples came from four different environments: forested and deforested areas that were either near to mining activity or removed from it. Two of the forested areas near mining activity were patches with small, scraggly trees, while the third was at the Los Amigos Biological Station, a pristine old-growth forest that has never been disturbed.

The results of the analysis, published today in the journal Nature Communications, showed that samples from deforested areas had low levels of mercury regardless of their proximity to mining activity. Deforested areas would be expected to receive mercury only in the rainfall and so levels would be comparable to those currently recorded in atmospheric circulation globally.

In fact, the stand of old-growth pristine forest at the Los Amigos Biological Station was found to harbor the highest levels of mercury ever recorded anywhere in the world, rivaling industrial areas where mercury is mined.

“We found that mature Amazonian forests near gold mining are capturing huge volumes of atmospheric mercury, more than any other ecosystem previously studied in the entire world,” said study lead author Jacqueline Gerson, who is currently a postdoctoral researcher at the University of California, Berkeley.

The researchers used a parameter called leaf area index to quantify the density of the forest canopy at each site. They found that mercury levels were directly related to the leaf area index, indicating that the more leaves there are present in the canopy, the more mercury is accumulated. The leaves therefore trap the gases and smoke particles that originate from the open-pit heating of gold pellets.

Not only was the mercury accumulating in the leaves of trees, either. The researchers hypothesized that the metal would undergo bioaccumulation and be present throughout the food webs in the Peruvian rainforest ecosystems. They measured the mercury levels in the feathers of three species of songbirds in forest reserve areas close to, and far from, gold mining operations.

They found that birds from Los Amigos had on average three times (and up to 12 times) more mercury accumulated in their feathers, when compared to birds from other forest stations that were far from mines.

Mercury can be ingested with contaminated food or water, and can also be inhaled and enter the body through the mucus membranes. It is extremely toxic and can have serious impacts on the nervous system as well as the success of reproduction. The high concentrations of mercury in the songbirds could result in a decrease in reproductive success of as much as 30 percent, report the authors.

“These forests are doing an enormous service by capturing a huge fraction of this mercury and preventing it from getting to the global atmospheric pool,” said Professor Emily Bernhardt. “It makes it even more important that they not be burned or deforested, because that would release all that mercury back to the atmosphere.”

Since small-scale artisanal gold mining provides a livelihood for local communities that have little other source of income, it is not feasible to disallow or ban the activity. Just as with the American gold-rush that ravaged California in the 1850s, it is driven by economic necessity, and impacts indigenous communities disproportionally.

“This is not something new or exclusive to this area,” said Professor Bernhardt. “A very similar thing, with very similar methods, has already been done throughout many of the wealthy countries of the world where gold was available. The demand is just pushing mining further into new areas.”

“There’s a reason why people are mining,” said Gerson. “It’s an important livelihood, so the goal is not to get rid of mining completely, nor is it for people like us coming in from the United States to be the ones imposing solutions or determining what should happen.”

“The goal is to highlight that the issues are far vaster than water pollution, and that we need to work with local communities to come up with ways for miners to have a sustainable livelihood and protect indigenous communities from being poisoned through air and water.”