Inbreeding has led to genetic advantages in flightless parrots • Earth.com 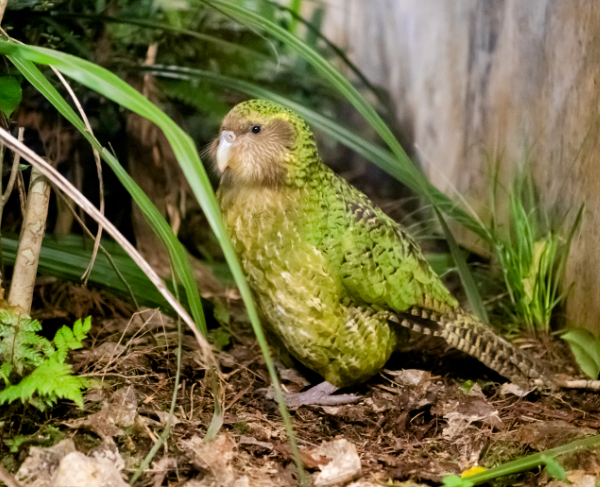 Inbreeding has led to genetic advantages in flightless parrots

In New Zealand, endemic flightless parrots, known as kākāpō, used to number tens of thousands and were widespread throughout the mainland and offshore islands. By 1995, however, these populations had undergone severe losses due mostly to overhunting by humans and predation by introduced mammals. A total of only 51 birds survived. Fifty kākāpō inhabited Stewart Island, a small island off the south coast of New Zealand, and only one individual, named Richard Henry, survived on the mainland.

The species was considered critically endangered and management strategies were developed to promote breeding and enhance genetic diversity in order to protect the remaining birds.

Of the 51 individuals that survived the genetic bottleneck, only Richard Henry and 39 others reproduced; these 40 birds are thus the ancestors of all kākāpō hatched since 1995. Today, 204 individuals represent this species, most of them descendants of the kākāpō population on isolated Stewart Island.

In recent research conducted by scientists from Sweden and New Zealand, the genomes of 49 kākāpō were sequenced and analyzed to investigate the impact of inbreeding on the birds. Genetic material was obtained from 35 individuals in the Stewart Island population, from Richard Henry who survived on the mainland, and from a further 13 museum specimens that also represented the now-extinct population on the mainland.

Population genetics theory suggests that very small, inbred populations will suffer an accumulation of genetic mutations that will eventually reduce fitness and lead to extinction. Modern day kākāpō have reportedly lost 70 to 80 percent of their genetic diversity since the 1800s and show poor sperm quality and low hatching success, suggesting that they do indeed carry deleterious mutations in their genes.

However, the current study reported surprisingly positive results; despite 10,000 years of isolation and inbreeding on Stewart Island, the kākāpō there have fewer harmful mutations than were found in the genomes of the now-extinct populations on the mainland. The flightless parrots on Stewart Island appear to have lost mutations in their genes, rather than accumulated them.

“Even though the kākāpō is one of the most inbred and endangered bird species in the world, it has many fewer harmful mutations than expected,” says Nicolas Dussex, a researcher at the Center for Palaeogenetics and Stockholm University. “Our data shows that the surviving population on Stewart Island has been isolated for approximately 10,000 years and that, during this time, harmful mutations have been removed by natural selection in a process called ‘purging’ and that inbreeding may have facilitated it.”

“In small populations, this type of harmful mutation can lead to genetic diseases,” adds Love Dalén of the Center for Palaeogenetics and Swedish Museum of Natural History. “Our finding of a reduced number of harmful mutations is therefore important, since it means that inbreeding in the present-day population is likely to have less severe impact than we had initially thought.”

The authors state that their findings can be used to inform breeding programs in future, and to select breeding individuals that do not introduce harmful genetic mutations. Richard Henry, for example, is genetically distinct from the Stewart Island kākāpō and might be considered an important breeder in terms of improving genetic diversity. However, his genome carries more harmful mutations than the genomes of the Stewart Island birds and this means that he may not be the ideal father for future offspring after all.

The findings from this study can now be applied in the small and endangered populations of other species. “Our results are good news, not only for kākāpō but also for the conservation of other highly inbred and isolated species, because they suggest that it is possible, under some circumstances, for small populations to survive even if isolated for hundreds of generations,” says Bruce Robertson, University of Otago, who has studied kākāpō genetics for 25 years.

“While the species is still critically endangered, this result is encouraging as it shows that a large number of genetic defects have been lost over time and that high inbreeding alone may not necessarily mean that the species is doomed to extinction,” Dussex says. “It thus gives us some hope for the long-term survival of the kākāpō as well as other species with a similar population history.”

The study is published in the journal Cell Genomics.