“Incredible Hulk” comet may explode as it heads toward the sun • Earth.com 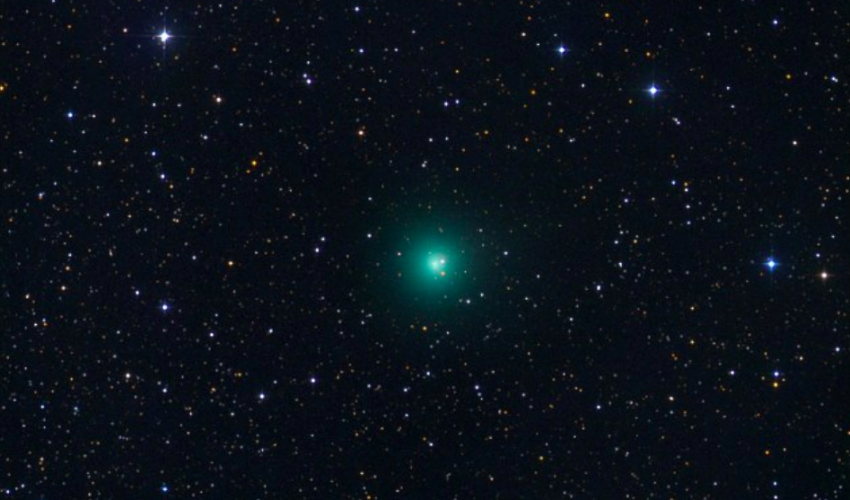 “Incredible Hulk” comet may explode as it heads toward the sun

First discovered in September of 2017 by the Panoramic Survey Telescope and Rapid Response System in Hawaii (PasSTARR), a comet with a green dust cloud so massive it was nicknamed “The Incredible Hulk” is heading toward our inner solar system.

Officially named PANSTARRS (C/2017 S3), the comet’s dust cloud is so bright that astronomers say it could soon be visible to the naked eye.

C/2017 S3’s dust cloud is unstable and astronomers are not sure if the comet itself will disintegrate as it heads toward the sun or be catapulted back into the far reaches of the solar system.

The atmosphere of the comet is 161,556 miles wide according to the Daily Mail, which nearly twice as large as Jupiter.

“It looked suspiciously ‘gassy,’ so I applied the Swan Band filter and both the brightness and size of the coma increased, a sure sign of a gas blast from the outburst,” Bob King wrote in Sky and Telescope magazine. “’The outburst could continue or even trigger the comet’s disintegration.”

The coma of the comet is the resulting cloud of dust and gases that form around the nucleus or ice ball center of the comet as it travels through space.

If you get a glimpse of the comet, King said to expect to see a tailless comet with a vivid gas cloud surrounding it.

What is interesting about the comet is the rate at which its coma is brightening.

Just this week, an astronomer from Austria told the Daily Mail that the coma brightened at a 16 fold increase.

The comet is expected to reach perihelion, a comet’s closest approach to the sun, on August 15 or 16 and this will mark the first time that C/2017 S3 has ever been so close to the inner planets of our solar system.