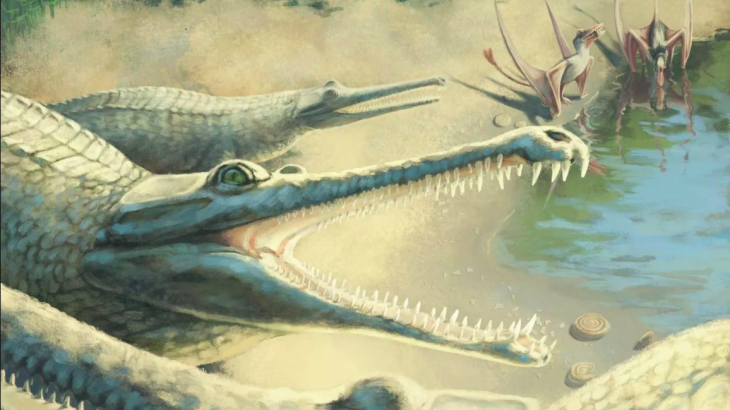 Nearly 250 years after its fossil was discovered in Germany, an 180-million-year-old crocodile has finally been identified as a Mystriosaurus laurillardi.

This positive identification comes 60 years after paleontologists first hypothesized that the ancient croc was a member of a similar species, called Steneosaurus bollensis, which lived during the same time as Mystriosaurus.

Mystriosaurus had a long snout, sharp teeth, and primarily ate fish within tropical waters during the Jurassic period. It’s believed that the creature could grow up to 14.7 feet long.

The prehistoric crocodile was finally identified after a team of paleontologists, some of whom hailed from the University of Edinburgh, compared its fossil to other fossils found in both the U.K. and Germany. During this process, the team successfully identified another mystery skull found in Yorkshire in the 1800s as also belonging to a Mystriosaurus laurillardi.

Because Mystriosaurus fossils have been located in present-day Germany and the U.K., scientists believe the crocodile could easily swim between islands.

“Mystriosaurus looked like a gharial but it had a shorter snout with its nasal opening facing forwards, whereas in nearly all other fossil and living crocodiles the nasal opening is placed on top of the snout,” said study leader Sven Sach, of the Naturkunde-Museum Bielefeld.

“Unravelling the complex history and anatomy of fossils like Mystriosaurus is necessary if we are to understand the diversification of crocodiles during the Jurassic,” added fellow researcher Dr. Mark Young, of the University of Edinburgh’s School of GeoSciences. “Their rapid increase in biodiversity between 200 and 180 million years ago is still poorly understood.”

The identification and corresponding study is published in the journal Acta Paleontologica Polonica.