Kīlauea eruption was caused by a series of small changes • Earth.com 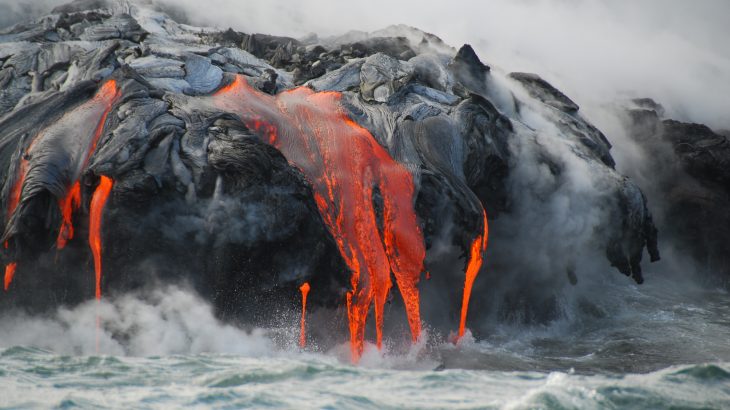 A new study from UH Mānoa and the USGS has revealed that the massive Kīlauea eruption was triggered by relatively small changes, including the accumulation of pressure in the upper parts of the volcano that drove magma into the lower flank. The experts report that when magma became backed up at the Puʻu ʻŌʻō eruption site, it increased pressure throughout the volcano.

“Kīlauea’s 2018 flank eruption, on the volcano’s lower East Rift Zone, produced approximately one cubic kilometer of lava and was the most destructive volcanic event in the past 200 years in Hawaii, with over 700 structures destroyed,” wrote the study authors. “The accompanying collapse of the summit caldera was one of the largest at Kīlauea in centuries, triggering small explosions and tens of thousands of earthquakes that damaged nearby infrastructure.”

“Kīlauea has one of the most comprehensive volcano monitoring networks on Earth, and the 2018 eruption provides an excellent opportunity to understand the complex processes that culminate in destructive flank eruptions, the timescales of priming and triggering in open-vent basaltic systems, and how forecasting such extreme events might be improved.”

The researchers analyzed data collected by the monitoring network before and during the eruptions at the Kīlauea summit and flank. Based on their analysis, the experts reconstructed the geologic events.

“The data suggest that a backup in the magma plumbing system at the long-lived Pu’u ‘Ō’ō eruption site caused widespread pressurization in the volcano, driving magma into the lower flank,” said Patrick.

As the eruption evolved, a series of cascading events caused relatively minor changes at Puʻu ʻŌʻō to escalate into major destruction and unprecedented modifications of the volcano. The potential for such a chain reaction of events was not taken into consideration during the time leading up to the eruption.

“This form of tunnel vision, which gives less attention to the least likely outcomes, is a bias that can be overcome by considering the broader, longer history of the volcano,” explained study co-author Professor Bruce Houghton. “For Kīlauea, this consists of widening the scope to consider the types of behavior seen in the first half of the 20th century and perhaps earlier.”

“Our study demonstrates that eruption forecasting can be inherently challenging in scenarios where volcanoes prime slowly and trigger due to a small event, as the processes that build to eruption may be hard to detect and are easy to overlook on the scale of the entire volcano,” said Patrick. “It is also a cautionary tale against over-reliance on recent activity as a guide for future eruptions.”