Plans for the Korean Demilitarized Zone are a mixed blessing for wildlife • Earth.com 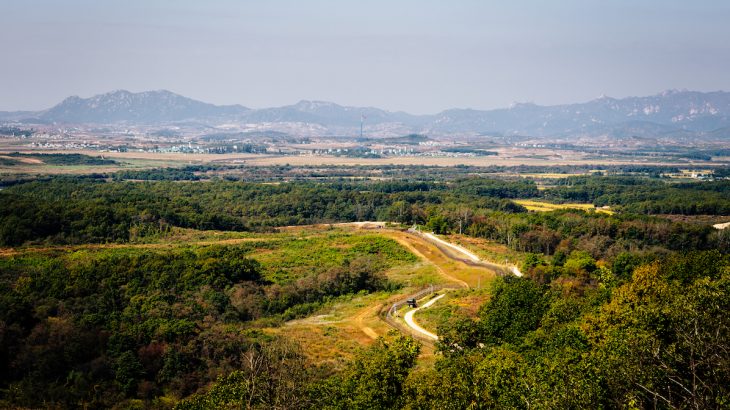 The Korean Demilitarized Zone (DMZ) refers to the area of land that runs across the Korean Peninsula and serves as a buffer between North Korea and South Korea. The strip of land measures 160 miles long and 2.5 miles wide, dividing the peninsula in half.

Japan Times reports of a recent ceremony where a few select hikers from South Korea were invited to enjoy a hike along the ‘peace trail’ just outside the DMZ, where civilians have limited access.  The trail passed through forest below a mountain peak. Despite the hikers and music played at the celebration of peace, there was an overshadowing absence. Despite being invited, no one from North Korea showed up at the ceremony.  Yet any peace process, especially one involving a nation like North Korea, is bound to have its ups and downs.

In the wake of recent talks Kim Jong Un has held with both U.S. president Donald Trump and Russian president Vladimir Putin, Reuters reports that Un warned of the potential return of a state of hostility in the Korean Peninsula.

Foreign Affairs reports that even after negotiations between Trump and Kim Jong Un ended early in Hanoi without an agreement, South Korean officials remained optimistic.  Both Kim Jong Un and Donald Trump showed unusual amounts of restraint and there was no return to antagonistic military operations. It seems that for the time being, North Korea has at least kept dialogue open with the US and the rest of the world.  Many feel that sanctions are slowly working. Peace through the whole Korean Peninsula or at least denuclearization still seems like a viable possibility in the not too distant future. After all, there have been some hopeful signs, like North Korea detonating some of its front line guard posts along the DMZ, as ABC News reported.

Peace would of course be a wonderful thing, but changing the DMZ might have some negative consequences as well.

As hikers walking along the ‘Peace Trail’ suggest, much of the area inside and just outside of the DMZ is relatively undisturbed nature.  The undisturbed aspect of the area goes far beyond what a typical national park might be like, as there are no real hiking trails, no roads, no campgrounds.  Instead, wild animals and plants live with almost no disturbance from humans.

The Korean DMZ expands one mile in each direction from the official border between North and South Korea.  Before the Korean War, much of the DMZ was agricultural land but now has been left untouched for 65 years, during which time wild ecosystems have rebounded.  Surrounded by razor wire and armed soldiers, the DMZ has been cut off and developed into a world of its own.

Covering landscape ranging from mountains to low wetlands, the DMZ has become a haven for rare wildlife, including globally declining red-crowned and white-napped cranes, Smithsonian reports.  The DMZ hosts five rivers and a few mountains.  In fact, according to the South Korean Ministry of the Environment, there are 5,097 species now living in the DMZ, including 106 protected species.

The Guardian reported that there are roughly 45 species of reptiles and amphibians, almost 100 species of fish, and possibly 1000 insect species living in the DMZ.  There have even been reports of tigers, an animal thought extinct in Korea prior to Japanese occupation. Some of these species might soon be threatened, perversely, by the specter of peace between nations.

The Guardian reports that decades of conflict and increased industrialization have quickly and radically changed the face of Korea.  Japanese colonial rule of Korea from 1910 to 1945 was heavy handed and oppressive.  The rule of Japan also brought with it increased urban growth along with an increase in mineral extraction and deforestation.  With this came not only economic growth but also environmental degradation, pollution, and erosion of mountains. The Korean War following this period only made the situation worse, spreading destruction across both rural and urban environments.

Through the 1960s and 70s, increased industrialization caused more environmental destruction.  The DMZ is one last piece of rewilded land left to Korea.

According to the Korean Ministry of the Environment, the possibility of peace has already brought with it calls for the development of the DMZ.  The ministry has its own plans for the DMZ. CNN Travel reports that South Korea is pushing for a ‘Peace Park’ in the DMZ.  The proposal was made at least as far back as 2013, and later announced at an international meeting for wetlands taking place in Switzerland.  For its part, North Korea has rejected the proposed ‘Peace Park’ dismissing the idea as a plan to make money off of tourism.

There is an amount of truth to the sentiments of making money from tourism.  The DMZ is a haven for wildlife, particularly because it excludes humans, not because it invites them in to take a walk.  With many parks in the world raising the issue of a landscape being loved to death, it’s hard to see how a park in the DMZ would be anything more than a compromise.  Animals that become used to humans may be easier prey to their natural predators. It can also make them easier targets for poachers. Inevitable development of parks including roads and hiking trails fragment and disrupt the natural habitat.  More pollution, more human noise and light are all likely to be impacts of a park. Even wildlife research can disrupt animals.

It’s hard to say what the total impact of turning an area that excludes humans into an inviting tourist destination will be in the long run.  For the moment, it’s a good thing that even in a heavily controlled region, there’s a ribbon of habitat with no human control at all.