The largest frogs in the world build ponds for their young • Earth.com 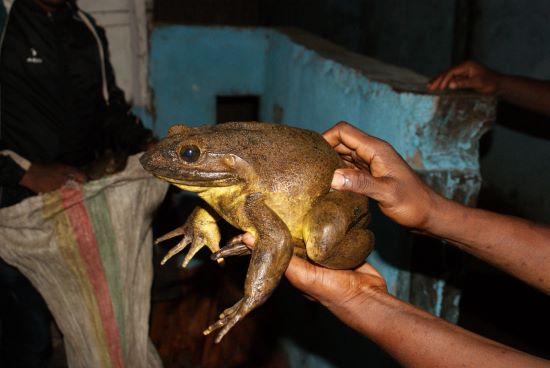 The largest frogs in the world build ponds for their young

The Goliath frog is the largest frog in the world and the only known species of African amphibian that build nests for its young, according to a new study.

These mammoth amphibians live in Cameroon and Equatorial Guinea and are highly endangered. Deforestation has led to the population declines of over 50 percent in the past ten years.

Researchers know very little about these frogs, particularly in terms of their supposed top-notch parental instincts.

Dr. Mark-Oliver Rödel from the Berlin Museum of Natural History led a study to investigate the reproductive behaviors of Goliath frogs in the wild.

The study findings were published in the Journal of Natural History

Researchers waded along the edge of the Mpoula River trying to spot breeding sites. Tadpoles and eggs were a good sign that the researchers were in the right place, but soon, a pattern emerged among the breeding sites.

Goliath frogs pile up materials like rocks and leaves to create a pond that is safe from the current. The discovery marks the first example of nest building seen in African amphibians.

“Goliath frogs are not only huge, but our discovery shows they seem to be attentive parents as well,” said Marvin Schäfer, an author of the study. “The little ponds they make at the edges of fast-flowing rivers provide their eggs and tadpoles with a safe haven from sometimes torrential waters, as well as from the many predators living there.”

Goliath frogs build three different types of ponds for their young. Some of the frogs prefer to clear out a rock pool that is already protected from the current, cleaning the pool of debris and leaf-litter.

Other frog parents push away leaf-litter and debris to the edges of their pond, but the third type of pond is the safest because the tadpoles or eggs are less likely to be washed away in case of a flood.

In the third kind of pond, frogs move large stones, and the depression left by the rocks forms a circular pond.

Having developed such keen parental instincts and the ability to lift heavy rocks could explain why the Goliath frogs grew to be so big.

“We think that the heavy work they put into excavation and moving rocks may explain why gigantism evolved in these frogs in the first place.”

The researchers also found that one adult Goliath frog will guard the nest all night, standing watch in case a predator comes by.

“The fact that we’ve only just discovered these behaviours shows how little we know about even some of the most spectacular creatures on our planet,” said Rödel. “We hope that our findings, combined with further ongoing research, will improve our understanding of the needs of the Goliath frog so we can help support its continued survival.”