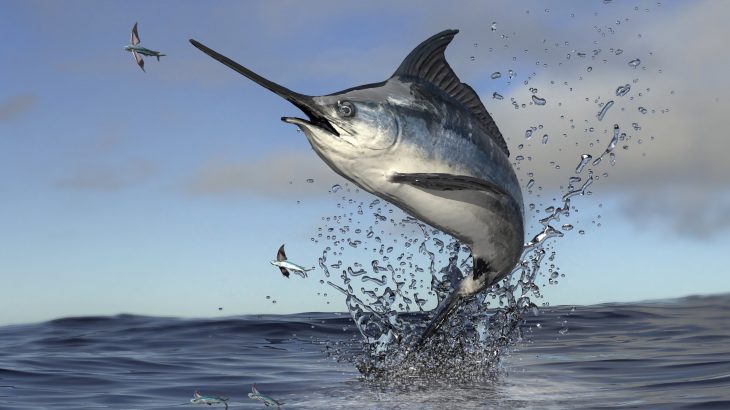 In a new study from the ARC Centre of Excellence for Coral Reef Studies, scientists report that by leaving more big fish in the ocean, the amount of carbon dioxide (CO2) released into Earth’s atmosphere can be reduced.

“Contrary to most terrestrial organisms, which release their carbon into the atmosphere after death, carcasses of large marine fish sink and sequester carbon in the deep ocean. Yet, fisheries have extracted a massive amount of this ‘blue carbon,’ contributing to additional atmospheric CO2 emissions,” explained the study authors.

“Here, we focus on a previously underrecognized pathway of carbon sequestration by fish: their capacity to sequester carbon in the deep sea after their natural death. More precisely, we estimate how catching large fish from the ocean may have affected this carbon sequestration potential through the sinking of dead fish carcasses.”

When a fish dies in the ocean, it sinks to the seafloor along with all of the carbon it contains, where it is absorbed by oceanic sediments and stored as blue carbon.

“But when a fish is caught, the carbon it contains is partly emitted into the atmosphere as CO2 a few days or weeks after,” said study lead author Gaël Mariani.

The unprecedented research shows that ocean fisheries have released at least 730 million metric tons of CO2 into the atmosphere since 1950. “Like any other food production sector, fishing also emits CO2 by consuming and burning fuel. In the fishing sector, fuel consumption represents the majority of its carbon footprint,” wrote the researchers.

Large fish like tuna, sharks, mackerel, and swordfish are made up of about 10 to 15 percent carbon.

“When these fish die, they sink rapidly,” explained Professor Mouillot. “As a result, most of the carbon they contain is sequestered at the bottom of the sea for thousands or even millions of years. They are therefore carbon sinks – the size of which has never been estimated before.”

Professor Mouillot said this natural phenomenon, a blue carbon pump, has been increasingly and greatly disrupted by industrial fishing.

According to the researchers, the disruptions are mainly taking place in areas where fishing is not economically profitable – in the Central Pacific, South Atlantic, and North Indian Oceans.

“Fishing boats sometimes go to very remote areas – with enormous fuel consumption – even though the fish caught in these areas are not profitable and fishing is only viable thanks to subsidies,” said Mariani.

The study authors noted that the findings strongly support the need for more reasonable fishing. “We need to fish better,” said Professor Mouillot.

“The annihilation of the blue carbon pump represented by large fish suggests new protection and management measures must be put in place, so that more large fish can remain a carbon sink and no longer become an additional CO2 source,” said Mariani. “And in doing so we further reduce CO2 emissions by burning less fuel.”