Leucistic animals are not to be confused with albino animals • Earth.com 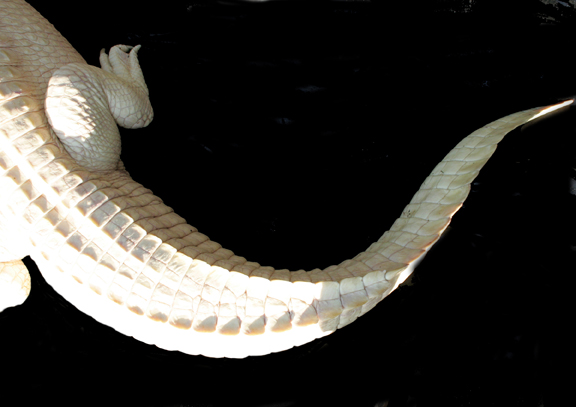 Leucistic animals are not to be confused with albino animals

“It was the whiteness of the whale that above all things appalled me,” declares Ishmael, the narrator of Herman Melville’s Moby Dick: Or The Whale of the titular leviathan. The sperm whale that is the focus of the infamous Captain Ahab’s maniacal obsession, though described in the book as albino, was in fact likely leucistic.

Unlike a true albino, his body is described as “ being of stripes and patches between white and gray.” Melville devotes an entire chapter of the book to the strange beauty of white animals, noting the color’s superstitious associations—”all ghosts rising in a milk-white fog.”

Most white animals seen in the wild are leucistic, including whales like the humpback Migaloo, who frequents the Australian coast. That is, they possess abnormal white coloration, either partially or fully, and in most cases normally colored eyes. Albinos, on the other hand, are all white but have pink or red eyes. In the wild, few albino animals survive. In addition to being conspicuous to predators, they often have poor eyesight. However, leucistic animals abound both in wild and domestic animal populations and in some cases the condition may actually be an adaptive advantage.

While albino animals possess melanocytes, the cells responsible for producing melanin, which results in dark brown and black pigments, the enzyme tyrosinase, necessary for melanin production, is either lacking or dysfunctional. Leucistic animals lack melanocytes entirely, at least in the areas of their bodies that are white. (Partial leucism is possible; pigmented areas are those where melanocytes are present and functional.) The mechanism by which these cells are lost, or rather, improperly dispersed, is an interesting one.

It occurs early in the embryonic stage. A structure known as the neural crest develops along the future spinal column of the animal. From this area, many types of cells radiate outward to their eventual places on the mature animal. Among them are melanocytes, which settle in the skin. In leucistic animals, these cells fail to migrate. In partially leucistic animals, only some of them migrate. This results in a patchwork or piebald pattern. Intriguingly, this is why many piebald animals display color along the spine and white along the legs, ventral area, and head: the white areas are furthest from the neural crest during the embryonic stage. The cells responsible for eye coloration are different, accounting for why leucistic animals usually have normally pigmented eyes.

One need not look to the ocean deeps for leucistic animals. You may not need to look much further than your own feet. Do you have a piebald dog or cat? If the canine or feline friend interrupting your reading is of the spotted variety, like a springer spaniel or a tuxedo cat, you’re looking at partial leucism.

Leucism is thought to be closely tied to what is known as domestication syndrome. Look at any domestic animal and you’ll likely see a pattern, at least in some number of individuals. Floppy ears, neotonic features, including behaviour usually only seen in young animals, and… you guessed it… spots. This suite of characteristics is seen in dogs, cats, cows, goats, rabbits, and even the recently domesticated fox. These features may be genetically linked; reduced adrenal function, present in many domestic animals is thought to account for their more placid and affectionate behaviour.

Outside the barnyard and the living room, leucistic animals thrive as well. In addition to whales and other cetaceans, leucism has been spotted in species ranging from ravens and eagles to deer and mice to snakes and bats and even sharks and skates. Invertebrates, however, do not exhibit leucism, as their exoskeletons express pigmentation differently than vertebrate epidermis and scales, hair or feathers. Though leucism would appear to be an adaptive disadvantage, due to the fact that white animals lack the cryptic coloration that serves to protect them from predators and conceal them from prey, in some cases, the reverse appears to be true.

The so-called spirit bear or Kermode bear of British Columbia, in fact a leucistic variant of the American black bear, has been hypothesized to excel at hunting salmon over its black confreres due to the fact that it is less visible to its aquatic prey from above during the day. Similarly, a coastal population of caracaras, a bird of prey, located in Patagonia, Argentina, is thought to have a high number of leucistic individuals due to the presence of large numbers of white seabirds. Because they too are white, they may appear less threatening to potential prey, who don’t fear the seabirds.

Leucistic European vipers are much more common on remote Scandinavian islands than on the mainland for entirely different reasons. The lower densities of predators on the islands may have allowed the usually deleterious mutation to persist. Conversely, leucism may be maladaptive in some birds. Melanin provides some of the structural strength of bird feathers and its absence may make them brittle. Other animals may be sunburnt due to their white skin, as in the case of leucistic alligators, which must be supplied with special heat lamps in captivity to avoid this condition.

An amusing but discounted anecdote explains the use of the lovely term “isabellinism” to describe leucistic birds such as penguins, which sometimes display a yellowish-gold hue. According to this inaccurate legend, Isabella I of Castile refused to change her undergarments until a siege had ceased; the siege lasted three years, resulting in some rather discolored intimate apparel.

As tempting and hilarious as that story is, I can’t help but be pleased that it isn’t true. I’d hardly call these creatures discolored. I prefer Melville’s description of them as possessing a “wondrous bodily whiteness.”