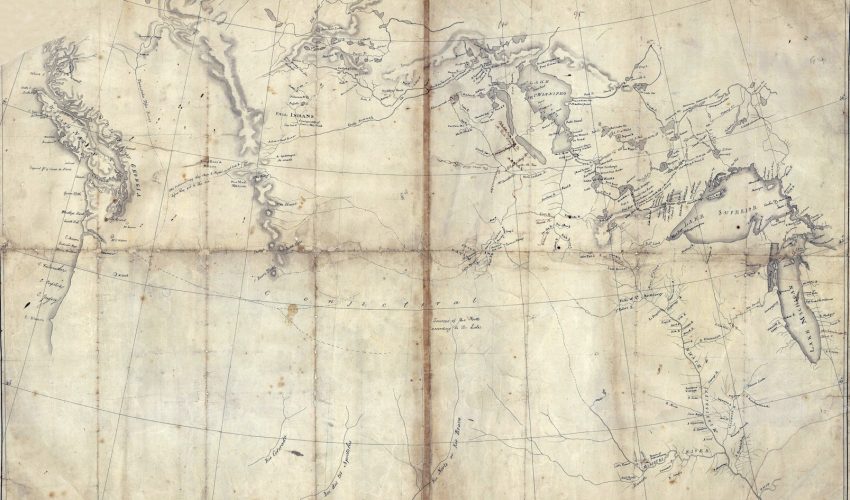 In 1803, the United States under President Thomas Jefferson had added 283,000 square miles of largely unexplored land to the nation through the Louisiana Purchase. Jefferson wanted to map the acquisition and even the land beyond that huge parcel, and find a water route to the Pacific Ocean. He chose an aid and former military captain, Meriwether Lewis to lead an epic expedition into the unexplored land. Lewis chose a friend and one of his former U.S. Army officers, William Clark, to co-lead some 50 army volunteers and hired boatsmen.

There could be a great deal of risk for the explorers making up what was half adventurously and half bureaucratically called the Corps of Discovery. For one thing, the group was expected to lay claim to the Pacific Northwest and what was then called the Oregon Country, despite the Spanish having already planted a flag in a large chunk of the far West.

Also, the Corps was expected to serve as a sort of diplomatic mission to native tribes found along the way, and no one really knew how approachable the so-called Indians would be.

The Corps of Discovery left St. Louis, Missouri on May 14, 1804 on a keelboat and an assortment of smaller sail-driven watercraft known as pirogues. They would spend the next two years, four months and ten days in search of a waterway route that could cross the country and get vessels to the Pacific Ocean – the rough equivalent of the railroad system that would later do the same thing. They never plotted that uninterrupted water route, but they found so much more.

Among their other goals, Lewis and Clark were to observe the land and bring back samples of the animals and plants found along the way. That’s because Jefferson, like others left blind to the new country, believed many of the legends of what would be found in its great unexplored interior. Among the most colorful images, Americans of the civilized eastern cities expected Lewis and Clark to find erupting volcanoes, woolly mammoths, Peruvian llamas and – for some reason – blue-eyed Welsh-speaking Indians.

Unfortunately, Lewis and Clark found none of the above, but they certainly found Indians. They achieved contact with, and forged relationships both good and bad with dozens of tribes along the way.

Lewis and Clark’s contact with the land’s indigenous people ranged from mutually beneficial to distrusting to bloody. They established a close enough relationship with the Mandan tribe that they wintered that first year at Fort Mandan, a shelter they built along the Missouri River across from a Mandan village.

The Nez Perce out West saved the expedition from starvation in the late summer of 1805 and again the following spring on the group’s return trip.

And finally, they met the legendary Sacagawea, a Shoshone, and one of two wives of a French-Canadian trapper met along the way. The pregnant tribeswoman traveled with the group for several months and served as a guide and interpreter. She further proved her mettle by saving valuable journals and supplies when one of their pirogues tipped in fast-moving waters. Sacagawea was so respected by the group that she was allowed an equal vote in deciding where to winter in 1805. That might sound like a given today, but it would have been most unusual at the time, due both to her gender and race. A slave named York was also given an equal vote in the decision.

While most tribal contact was good, there were exceptions. The Corps never made contact with the Crow of Montana, but it was suspected that the tribe of highly respected horse thieves made off with some of their mounts.

The Corps also had many tense moments with the Teton Sioux, whom Clark wrote to be “the vilest miscreants of the savage race, and must ever remain the pirates of the Missouri,” until brought to justice by the Americans.

One of the points of stress was the language barrier. Also, the Teton Sioux were known as hard bargainers when it came to allowing boats to pass. They were insulted by the Jeffersonian medals and U.S. flags offered in trade. For one brief moment, Clark drew his sword and Lewis trained a boat gun on the group. However, calm was restored, and the expedition spent a couple days in hospitable relations with the tribe.

A more serious encounter occurred when the Corps had broken up in exploration of two different water routes and Lewis ended up with just three men in Blackfoot country in what is now Montana.  The Blackfeet were known to be among the fiercest and least welcoming of warriors to outsiders.

Lewis and his small party ran into a band of eight Blackfeet. They opened communications and gave the Indians small gifts, a transaction that went well enough that Lewis invited the eight to their camp. But the party infuriated the Blackfeet by impolitically mentioning that the Corps intended to trade with a rival tribe. In the middle of the night the tribesmen stole Corps rifles and horses. In the brief skirmish that followed, Lewis fatally shot one Blackfoot and a second warrior was killed by another member of the expedition. Lewis’s party got their horses and weapons back, but had to make a quick escape. The battle soured future relations between settlers and the Blackfoot tribe.

Over the long journey, the Corps of Discovery made generally beneficial contact with Clatsops, Walla Walla, Sioux, Nez Perce, Mandans, Hidatsas, Chinookans, Shoshone and inhabitants of many other native nations. They owed their lives to many of those encounters and learned alternative routes from them. When rescued the first time by the Nez Perce, the expedition was reduced to eating candle wax and their horses.

They also traded medical practices with the native tribes, many of whom they found to be as advanced as themselves with medicine. The tribes knew about making splints, using poultices and many medicinal uses of native roots.

What Jefferson had wanted the Corps to do was to introduce the tribes to representatives of their new government – obviously not an easy mission. It would take fast-thinking diplomats to bring up that topic, and Lewis and Clark generally made the most of the challenge.

Despite the sometimes harsh elements, periods of near starvation and the occasionally stressful and once bloody interactions with native tribes, the expedition only lost one member in its nearly two-and-a-half year journey. Sergeant Charles Floyd died three months into the expedition of a totally unexpected cause: acute appendicitis.

Clark was nearly killed by a grizzly bear out west while buffalo hunting, but outran it. The only other accidental major injury to plague the Corps befell Lewis himself. Just one month away from the end of their journey he was accidentally shot by one of his men while hunting, but it didn’t prove to be serious.

The other injuries were planned; they occurred as a result of the brutal military discipline of the day. Several Corps members were lashed for offenses that included breaking into the whisky supply, temporary desertion and falling asleep on guard duty. This last offense was treated particularly violently, with the sleepy private receiving 100 lashes a day for four straight days.

Perhaps the largest risk posed to the group was one never known to them. It was later learned that a Spanish contingent had been sent from California to capture the Corps when they reached the Pacific, but the Spaniards missed them.

Given up for dead

The Corps saw the ocean in November 1805. They wintered in what they called Fort Clatsop, named after another friendly tribe, and headed back home in the spring. They traveled by watercraft, by horses they traded with the tribes to get and, at times, by foot.

As they got closer to St. Louis, they learned from trappers and traders met along the way that America had long ago given them up for dead. Lewis and Clark were national heroes. They’d advanced relations – at least to some degree – with many tribes and they brought back stories of bison and pigmy goats (antelope) and rivers and waterfalls never before seen by white eyes.

Meriwether Lewis’s life would end in mysterious ways just a few years after the end of the Corps of Discovery. In 1809, an innkeeper heard shots and found him dying alone in a one-room rented cabin of two bullet wounds. Suicide and robbery-murder were both suspected at times. Even today, theories vary.

Clark later served as governor of the Missouri Territory and as the first superintendent of the Bureau of Indian Affairs before dying in 1838.