Lizard produces both eggs and a live birth from the same pregnancy • Earth.com 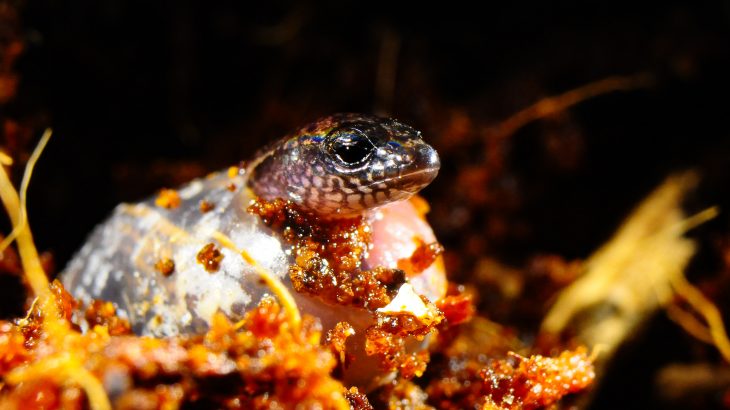 In an unprecedented event, an Australian lizard has laid three eggs before giving birth to a live baby weeks later from the same pregnancy. The three-toed skink is a rare “bimodally reproductive” species, in which some females lay eggs and others give birth to live babies. Until now, however, no vertebrate has ever been observed to do both in one litter.

Study lead author Dr. Camilla Whittington is an evolutionary biologist at the University of Sydney.

“It is a very unusual discovery,” said Dr. Whittington. “We were studying the genetics of these skinks when we noticed one of the live-bearing females lay three eggs. Several weeks later she gave birth to another baby. Seeing that baby was a very exciting moment!”

The small lizards are native to the east coast of Australia. Those located in the northern highlands of New South Wales usually give birth to live young, while those located in and around Sydney lay eggs.

According to Dr. Whittington, there are at least 150 evolutionary transitions from egg-laying to live-bearing in vertebrates.

“The earliest vertebrates were egg-layers, but over thousands of years, developing embryos in some species were held inside the body for longer, until some animals began to give live birth. People mostly think about humans and other mammals giving birth. But there are many species of reptile that give birth, too.”

Dr. Whittington said that the unusual observation of both egg laying and live birth in a single litter shows that the three-toed skink is an ideal model for understanding pregnancy.

“It makes Australia one of the best places in the world to study the evolution of live birth, because we can watch evolution in action,” said Dr. Whittington. “Put in the context of evolutionary biology, being able to switch between laying eggs and giving live birth could allow animals to hedge their bets according to environmental conditions.”