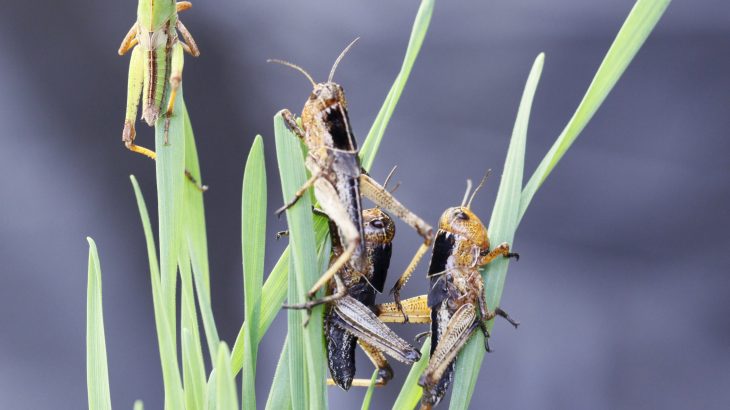 A new study has revealed how locusts change their body color to adapt to different settings. The scientists identified a mechanism that uses a red pigment as a switch to shift between green and black coloring.

Many animals use body color changes to survive in changing environments. The migratory locust, Locusta migratoria, displays a green color when it is living a more solitary life, while the insects living in larger swarms develop black and brown coloring. Prior to this research, however, the mechanism underlying this color transition remained a mystery.

“The green color of solitary locusts is likely due to a combination of yellow and blue pigments, helping to camouflage the insects among plants as protection from predators,” said study senior author Professor Le Kang of the Chinese Academy of Sciences. “In our study, we wanted to see whether the brown/black colors of gregarious locusts are caused when pigments are added to their green background following a solitary phase.”

The investigation was focused on locusts who were raised in either solitary or crowded conditions. The genetic analysis showed that both types of locusts have different levels of a protein called βCBP, which plays a key role in their color transition. The researchers discovered that the black coloring of the more sociable locusts increased in direct proportion to their βCBP levels, while these protein levels did not change in the solitary locusts.

βCBP is known to bind to and increase the amount of a red pigment called beta carotene (β-carotene) in the skin, and the scientists examined this molecular activity in the locusts. They found that the amount of β-carotene in the social locusts was almost a third higher compared to the solitary insects, which means that the levels of βCBP and associated β-carotene are directly related to the degree of their dark coloration.

“This suggests the change in locusts from green to black, caused by the βCBP-β-carotene protein complex, is an adaptive response to population density,” explained Professor Kang. “It provides gregarious insects with an alarm coloration that inevitably exposes them to the environment, allowing them to recognize others within the same species, form large populations and warn against predators.”

“Overall, we have presented the first evidence that the black/brown color of these locusts is formed by the red pigment in the protein complex. It will now be interesting to see if a similar mechanism has evolved in other insects that switch colors depending on their surroundings.”