Male butterflies mark their mates with a revolting scent after sex • Earth.com 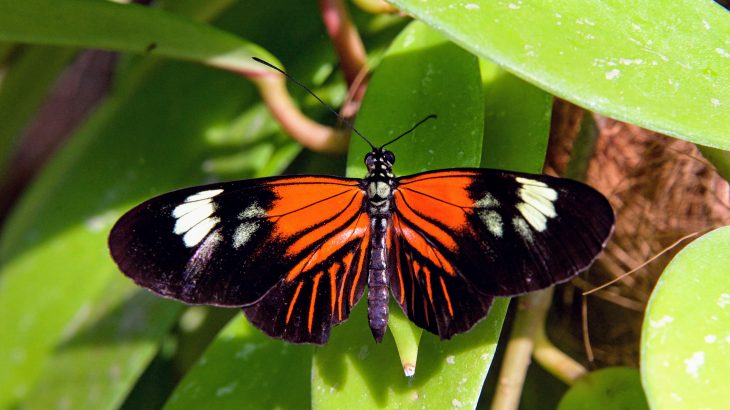 Male butterflies produce a chemical in their sex glands with a repulsive odor that they use to “claim their territory,” according to a new study. After sex, the butterflies mark their female mates with the revolting scent to deter other suitors from approaching.

Led by Professor Chris Jiggins of the University of Cambridge, a team of scientists mapped the production of the scented chemical compound in the tropical butterfly Heliconius melponene.

The chemical made in the genitals of the male butterflies turned out to be identical to a chemical produced by flowers to attract butterflies. The researchers identified a gene that shows butterflies and flowers independently evolved the same chemical for different purposes.

“For a long time it was thought insects took the chemical compounds from plants and then used them, but we have shown butterflies can make the chemicals themselves – but with very different intentions. Male butterflies use it to repulse competitors and flowers use the same smell to entice butterflies for pollination.”

Among thousands of species of butterflies, some live for a matter of just days or weeks. Heliconius melponene butterflies, which were studied in Panama, live for around six months. The females typically have few sexual partners. After a single mating, the females store the sperm and use it to fertilize their eggs over a number of months.

On the other hand, male Heliconius melponene butterflies have as many sexual partners as possible. Each time they mate, they transfer the odorous chemical in an effort to guarantee their sperm will be used to fertilize the offspring.

While Heliconius melpomene was found to produce the strong smelling pheromone ocimene, another closely related species – Heliconius cydno – does not produce the chemical.

If the smell of this pheromone has such a powerful effect, how do the butterflies know when to be attracted and when to keep moving? Dr. Darragh explained that context is key. “The visual cues the butterflies get will be important – when the scent is detected in the presence of flowers it will be attractive but when it is found on another butterfly it is repulsive to the males.”

The new insight into the power of smell, also called chemical signaling, highlights the importance of scent as a form of communication.

“The butterflies presumably adapted to detect it and find flowers and they have then evolved to use it in this very different way. The males want to pass their genes onto the next generation and they don’t want the females to have babies with other fathers so they use this scent to make them unsexy,” said Professor Jiggins.

“Male butterflies pester the females a lot so it might benefit the females too if the smell left behind means they stop being bothered for sex after they have already mated.”