Mangrove trees could vanish by 2050 without reduced emissions • Earth.com 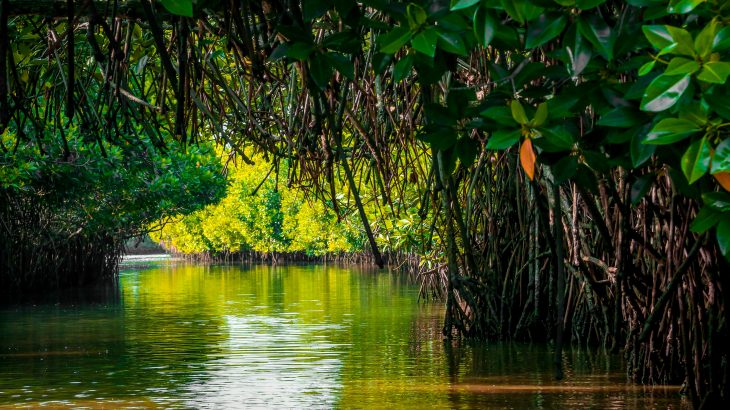 Mangroves can be found in warm tropical waters along the coastline of Africa and on the Atlantic coast from Florida all the way down to Argentina.

Mangrove forests are valuable ecosystems that store large amounts of carbon, support many species of fish and wildlife, and provide coastal protection.

The dense root systems of mangrove forests help to stabilize the coastline by trapping sediments that serve as a buffer from erosion and storm damage. Coastal areas where mangroves have been cleared suffer more intense impacts from typhoons and hurricanes.

An international research team led by Macquarie University investigated the extent to which mangroves will be able to endure sea-level rise. The study was focused on sediment data from the last 10,000 years.

The researchers identified a tipping point of six millimeters per year. When sea-level rise exceeds this rate, mangroves have a very slim chance of survival.

“Under high-emissions scenarios, rates of sea-level rise on many tropical coastlines will exceed 7 millimeters per year, the rate at which we concluded there’s a 3.5 percent probability mangroves can sustain growth,” said study co-author Erica Ashe.

“The loss of these mangrove ecosystems could result in increased carbon dioxide in the atmosphere and fewer vital buffers against storm surges in the long run.”

The study showed that mangroves are more likely to withstand sea-level rise at a rate of less than 5 millimeters per year, which could be achieved with lower greenhouse gas emissions.

The researchers examined how mangroves in 78 locations responded to various rates of sea-level rise in the past.

The sediment record showed that 4,000 years ago, climate conditions stabilized and the rate of sea-level rise declined. As a result, expanding mangrove forests were able to store more carbon and further stabilize the climate.

Mangroves naturally move inland as water levels rise, but coastal developments along many coastlines will inhibit this movement.

The findings confirm the urgent need to reduce greenhouse gas emissions and mitigate sea-level rise. In addition, coastal adaptation measures must be identified to allow mangroves to expand.