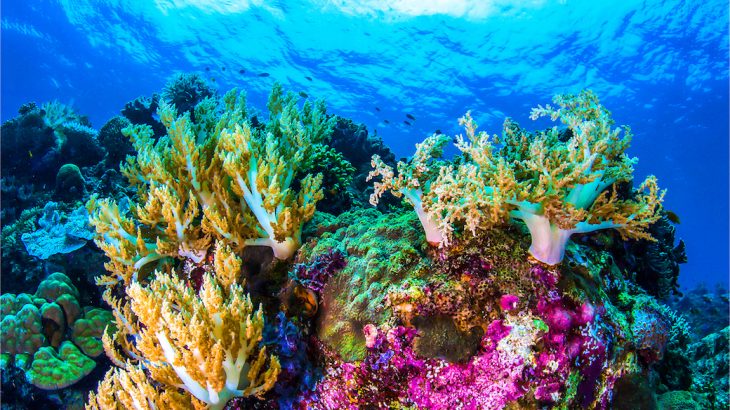 To monitor coral reefs, experts usually conduct underwater visual surveys using SCUBA, which can be both time-consuming and logistically challenging. But now, two biology experts at the University of Hawaii have developed a technique for measuring the amount of living coral on a reef by analyzing DNA collected in small samples of seawater.

Study co-author Peter Marko is an associate professor in the Department of Biology.

“If you asked me 10 years ago if this was possible, I would have said, ‘No way,’” said Professor Marko. “But advances in technology and falling costs of highly-sensitive DNA sequencing methods have opened the door to all kinds of important ecological questions.”

Along with graduate student Patrick Nichols, Professor Marko has demonstrated that the new method for analyzing environmental DNA (eDNA) is a quick and cost-effective way to measure live coral “cover,” or the amount of a coral reef occupied by living corals.

Coral cover is one of the most important measurements that scientists use to characterize the health of a reef, which has become an urgent task as climate change has pushed corals into a state of major decline.

“It still amazes me that in a tiny tube of water, there is enough information to track the relative abundance of entire communities,” said Nichols. “Increasing the breadth and scope of surveys is exactly what makes the future of eDNA so exciting!”

The researchers applied a technique in which all of the DNA in a water sample is analyzed in one step, known as “metabarcoding.” Next, coral DNA sequences are identified and counted to determine the abundance of different types of corals at each reef. Degraded reefs have very little coral eDNA, while reefs with more living corals have a much stronger coral eDNA signature.

The study authors explained that the new technology can be used to track changes in coral reef health and community composition over time, as well as to detect rare species that may otherwise be missed.

The study is published in the journal Environmental DNA.