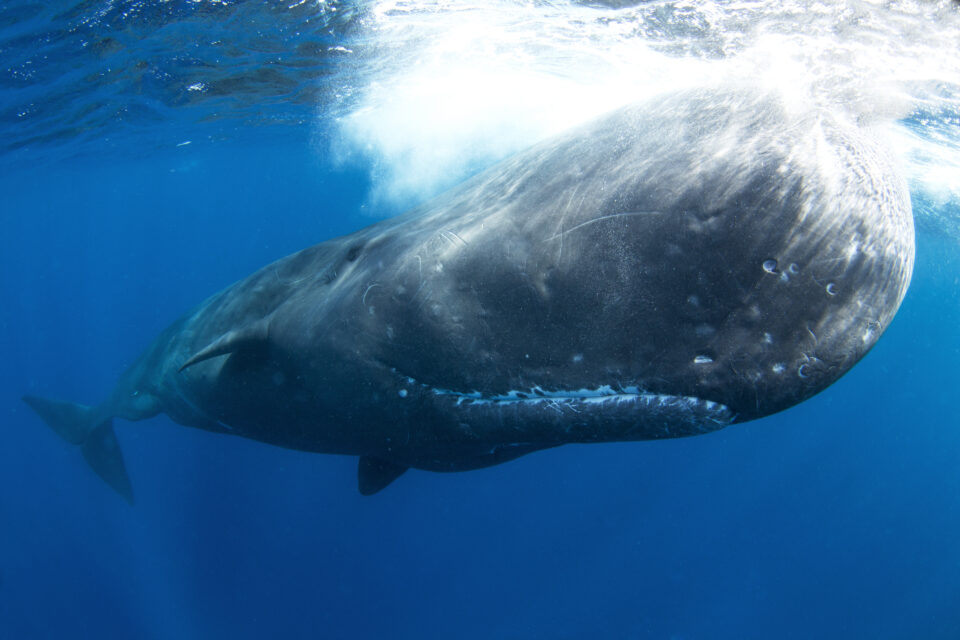 By investigating seven million-year-old fossilized sperm whale skulls discovered in Peru, a team of researchers led by the University of Zurich (UZH) has found that prehistoric sharks fed upon these whales. The predators included megalodons – some of the largest and most ferocious marine predators in our planet’s history.

According to the experts, the whales’ enormous snouts – measuring up to a third of their bodies – were particularly appealing to these sharks, since they were packed with highly nourishing oily saturated fats.

During the Miocene period (from about 23 million to 2.5 million years ago), warmer oceanic water temperatures combined with several protected coastal environments greatly benefited marine biodiversity. Among the various species of aquatic creatures, sperm whales and sharks were some of the most abundant ones. For decades, paleontologists struggled to understand the connections between these groups of large animals.

Now, scientists discovered half a dozen sperm whale skulls unearthed at the Pisco Formation in the Ica Desert in southern Peru, which contained a series of bite marks indicating that sharks consistently fed on them. “These are concentrated along the nose, mouth, and face. In sperm whales, these regions receive most of their greatly enlarged nasal organs that are responsible for the sound production and emission system,” explained study lead author Aldo Benites-Palomino, a paleontologist at UZH.

“The main organs of this complex are the spermaceti and the melon, structures rich in fats and oils, but also heavily regulated by the facial muscles. Most of the bite marks have been found on the bones that would be adjacent to these soft tissue structures, such as the jaws, or around the eye, thus indicating that sharks actively targeted this region.”

Since the overall shape, size, and arrangement of the bite marks were quite variable, most probably it was more than one species of sharks preying upon the sperm whales, including not only the ferocious megalodon, but also species that are still around today, such as mako sharks, sand sharks, or great white sharks. Today, most of these shark species seek the carcasses of baleen whales with high concentration of fats, such as the blubber.

“During the Miocene baleen whales were small, but sperm whales would have constituted a perfect fat repository due to their greatly enlarged and lipid-rich nasal organs,” Benites-Palomino concluded.