Inky black all over: The evolutionary implications of melanism • Earth.com 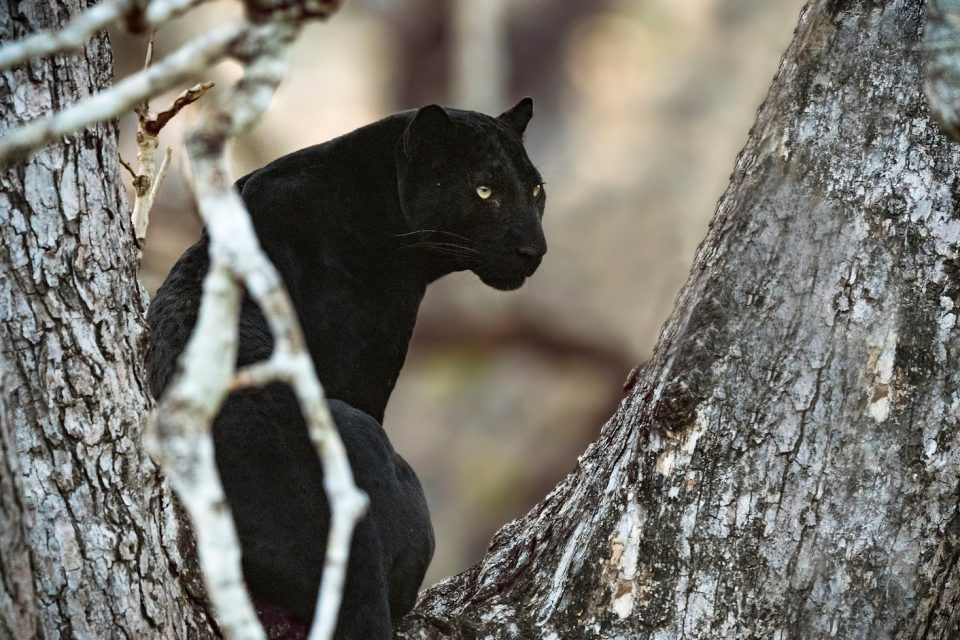 Inky black all over: The evolutionary implications of melanism

Bagheera, the clever panther in Rudyard Kipling’s The Jungle Book, is perhaps the most famous black animal in history. His coat is described as “inky black all over” and “like the pattern of watered silk” for its subtle, shadowy spots, visible only the when the sun strikes him at the right angle. In fact, Bagheera is a black Indian leopard (Panthera pardus fusca). The word “panther” is actually general, colloquial term also used to describe mountain lions (Puma concolor), a species native to the Americas. In Kipling’s masterpiece, the wily Bagheera instructs the young man cub Mowgli in the ways of the jungle.

Indeed, black, or melanistic, leopards are common in Indian forests.  As most people will know, leopards are typically golden-colored, with black rosettes. Melanistic specimens are black all over, but their spots can usually be seen in bright light. And leopards are far from the only animals to display atypically black coloration. Melanism, the incidence of unusual amounts of melanin resulting in black fur, feathers, or scales, is widespread in the animal kingdom. The word is derived from the Greek melanos, for dark-colored. It is considered a polymorphic characteristic; that is, one that appears in some, but not all members of a species.

Melanism has been a useful focus for genetic studies because of the clear visibility of the trait. Melanistic animals are often striking in contrast to their normally colored brethren and thus easy to pick out. The genes coding for the melanistic phenotype may be recessive or dominant. In comparing them to the genotypes of normally colored animals, melanistic genes have been relatively easy to isolate.

One of the most well known examples of melanism is that found in the peppered moth (Biston betularia) of England. The story of the moth, and the ascendance of the melanistic form, is also a classic parable illustrating evolution in action. Following the Industrial Revolution, peppered moths, which as their name suggests, are typically white and black spotted, began turning black, especially in urban areas. Due to the high use of coal and other fossil fuels, thick soot coated many surfaces in cities such as London, including the trunks of the trees on which peppered moths rested during the day.

Because their coloration had evolved to help them blend in with the natural coloration of the bark, rather than with the coal-blackened surfaces that became prevalent as a result of air pollution, normally colored moths became easy pickings for predatory birds. Melanistic moths, once uncommon for the same reason prior to the Industrial Revolution, soon became the dominant phenotype. Genetic analysis has dated the rise of this color form to 1819, correlated nearly exactly to the start of massive coal smoke emissions. So, a once disadvantageous mutation became the salvation of the species due to a changing environment.

Other species have utilized melanism in similar ways. This change can occur relatively quickly. A 2011 study demonstrated that melanistic pygmy grasshoppers (Tetrix subulata) were more common in areas that had burned the previous year, leaving a dark substrate. This neat little trick has been evocatively dubbed “fire melanism.”

A similar phenomenon occurs in rock pocket mice (Chaetodipus intermedius) that inhabit areas of lava flow, which is darker than the typical habitat of the species. In some cases, melanism has resulted in the mistaken classification of specimens as a separate species, as in the case of the gray partridge (Perdix perdix), which is darker colored in areas with dark colored peat substrate. In fact, this was simply an adaptive polymorphism within the species.

A 2017 Labex Corail & Université de la Nouvelle-Calédonie study indicated that turtle-headed seasnakes (Emydocephalus annulatus) in polluted bays of New Caledonia tended to be melanistic. Strikingly, this adaptation does not appear to be a deterrent to predation. Rather, melanistic snakes appear to be able to concentrate pollutants in their skins, allowing them to rid themselves of the poisons the accumulate when they shed. This was confirmed by the higher concentrations of pollutants found in the shed skins of melanistic individuals.

A 2008 study of sea kraits, another type of marine snake, however, found no apparent adaptive benefit to melanism. Occasional melanism in animals as diverse as black-crowned night herons and white-tailed deer also appears to be the result of a genetic fluke rather than any adaptive pressure selecting for the mutation.

Among the most studied melanistic animals are Bagheera’s cohort, the Felidae. Of the 37 species of cats, big and small, 13 are known to exhibit melanism. The melanistic mutation appears to have arisen at least five times in this family. The most well known mutations causing melanism in cats are the loss of function in the ASIP gene, which codes for the agouti pattern, and a gain in function of the MC1R gene, which is involved in the production of melanin.  In most cases, some adaptive purpose has been identified.

In leopards, melanism appears in five subspecies and is most common in those of Southeast Asia. This appears to be due to the camouflage properties offered by a darker coat in the dense forests of the region. In fact, a 2010 study indicated that a large proportion of leopards in peninsular Malaysia are melanistic. Though melanism does occur in leopards from Africa and other regions, it is not as useful in open habitat and is thus less common. For this reason, black Amur leopards, from Russia and China, are not used in zoo breeding programs for reintroduction into the wild. Similarly, melanistic jaguars (Panthera onca) are less common in open terrain than in dense jungle.

Adaptive effects have been noted in small South American cats such as the kokod (Leopardus guigna), pampas cat (L. colocolo), and Geoffroy’s cat (L. geoffroyi) as well. Another South American cat, the oncilla (L. tigrinus) was shown to differ in habits depending on whether or not it was melanistic. Melanistic specimens preferred to hunt on brightly lit nights, while normally colored specimens preferred darker conditions, presumably because their coats were less visible to potential prey.

Wolves in North America and Europe have also provided illuminating areas of study in regards to melanism. Melanistic wolves are thought to have resulted from ancestral cross-breeding with domestic dogs. As with cats, melanistic wolves are more common in heavily forested regions.

Much remains to be learned about the functions of melanism and associated mutations. One study suggested that melanistic barn owls (Tyto alba) had different sleep cycles and were more vigilant than their normally colored counterparts. And it has been proposed that melanism may in some ways be deleterious in that it blocks sunlight from the skin, decreasing vitamin D production.

One thing is sure: like Bagheera, these shadowy creatures are “no man’s plaything,” persisting in the face of, and perhaps because of, the wild and furious pressures of natural selection.