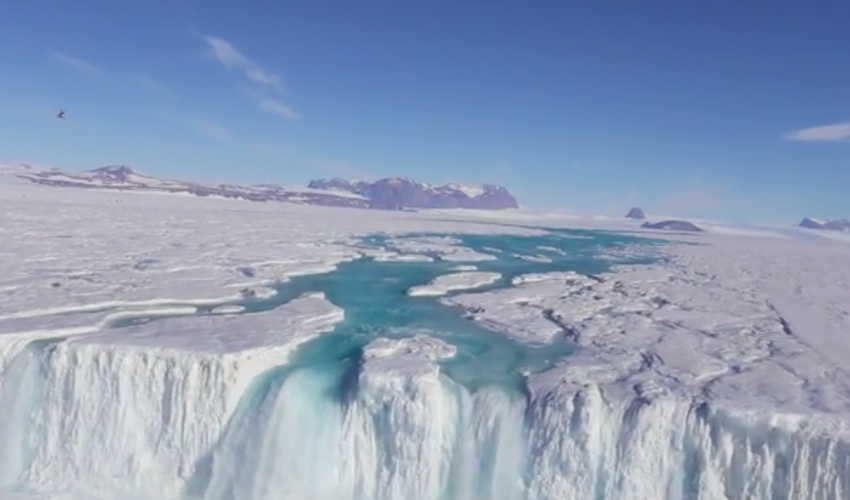 Water from melting ice is flowing extensively over Antarctica in the summers, which could raise sea levels if temperatures continue to rise, a new study found.

“This is not in the future–this is widespread now, and has been for decades,” said lead author Jonathan Kingslake, a glaciologist at Columbia University’s Lamont-Doherty Earth Observatory. “I think most polar scientists have considered water moving across the surface of Antarctica to be extremely rare. But we found a lot of it, over very large areas.”

Scientists have known since the early 20th century that streams of water from melted ice existed in Antarctica but the new study, published in the journal Nature, documents the extent of the flow, based on military photos and satellite images.

The drainage of so-called “meltwater” was once believed to be confined primarily to northern sections of Antarctica, but the new study finds it to be much more extensive. Melt streams were identified as close as 375 miles from the South Pole, and at 4,300 feet above sea level, where liquid water was thought to be rare to impossible.

Since the melted water re-freezes in the winter, the effects for now are “negligible” the study said, but that could change if temperatures continue to rise.

“This study tells us there’s already a lot more melting going on than we thought,” said coauthor Robin Bell, a polar scientist at Lamont-Doherty. “When you turn up the temperature, it’s only going to increase.”

Antarctica is already losing ice,  most of it near edges, as ice shelves are eroded by warming ocean currents. The shelves help hold back the glaciers further inland. As the shelves lose mass, it appears to accelerate the erosion of inland glaciers.

Data from the new study is too sparse in many locations to determine whether water flows from ice melts have increased over the last 70 years.

“We have no reason to think they have,” said Kingslake. “But without further work, we can’t tell. Now, looking forward, it will be really important to work out how these systems will change in response to warming, and how this will affect the ice sheets.”