Changes in meltwater lakes can cause ice shelves to bend • Earth.com 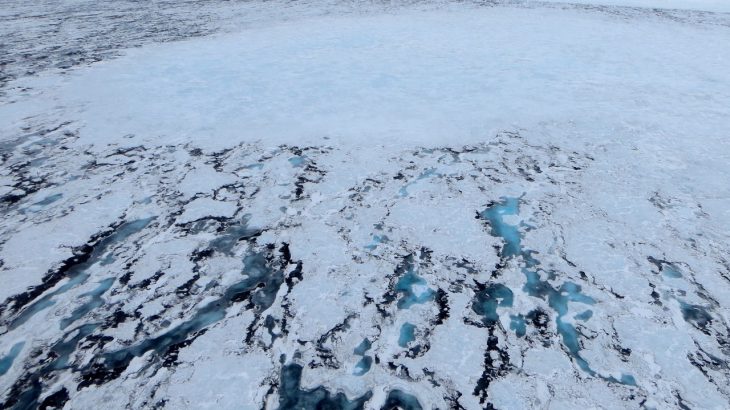 Changes in meltwater lakes can cause ice shelves to bend

An international research team led by the University of Cambridge has analyzed the response of the McMurdo ice shelf in Antarctica to the filing and draining of meltwater lakes on its surface. The team found that this activity causes the floating ice shelf to flex, which threatens its stability.

While scientists have speculated about this type of flexing and have even simulated it using computer models, this is the first time the phenomenon has been directly measured in the field.

The findings demonstrate a link between surface melting and the weakening of Antarctic ice shelves. The research also supports the theory that recent ice shelf breakup around the Antarctic Peninsula may have been at least partially triggered by large amounts of surface meltwater.

Study co-author Dr. Ian Willis explained, “Surface water on ice shelves has been known about for a long time. Over 100 years ago, members of both Shackleton’s Nimrod team and the Northern Party team of Scott’s British Antarctic Expedition mapped and recorded water on the Nansen Ice Shelf, around 300 kilometers from where we did our study on the McMurdo Ice Shelf.”

“For the last few decades, it has also been possible to see widespread surface meltwater forming on many ice shelves each summer from satellite imagery.”

The extent to which surface water might destabilize an ice shelf, especially when warmer temperatures result in larger amounts of meltwater, is not yet fully understood. The danger comes when water pools up in surface depressions on the ice shelf and forms large lakes. The extra weight will cause the floating ice to sink a bit further into the sea. Meanwhile, the ice around the edge of the lake will flex upwards to compensate.

“If the lake then drains, the ice shelf will now flex back, rising up where the lake used to be, sinking down around the edge,” said study lead author Dr. Alison Banwell. “It is this filling and draining of lakes that causes the ice shelf to flex, and if the stresses are large enough, fractures might also develop.”

The team hope that their work will inspire further research to explore whether flex and fracture is taking place on other ice shelves in Antarctica. The work will also help to inform ice sheet scale models that could be used to predict the stability of ice shelves in the future.