Microplastics travel long distances through the air and fall with the snow • Earth.com 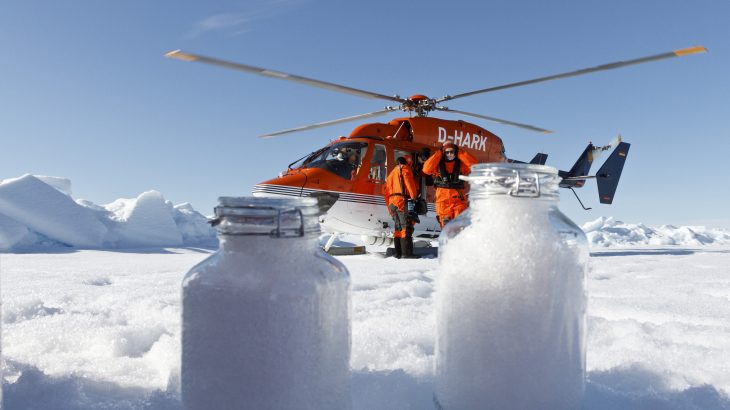 Experts at the Alfred Wegener Institute have determined that microplastic particles are moving across great distances in the atmosphere and being washed out of the air through precipitation, particularly snow. Microplastics were even found in snow in the most remote locations, such as the Arctic and the Alps.

In recent years, microplastics have been continuously detected in the ocean and in marine animals. Most research regarding humans has been focused on the amount of microplastic that people may be consuming in their food or drinking water.

“To date, there are virtually no studies investigating the extent to which human beings are subject to microplastic contamination,” said study co-lead author Dr. Melanie Bergmann. “But once we’ve determined that large quantities of microplastic can also be transported by the air, it naturally raises the question as to whether and how much plastic we’re inhaling.”

“This additional transport route could also explain the high amounts of microplastic that we’ve found in the Arctic sea ice and the deep sea in previous studies.”

Every year, several million tons of plastic litter makes its way into rivers, coastal waters, and even into the deep sea. As the litter is exposed to UV radiation and the motion of the water, it is broken down into tiny fragments that are known as microplastics.

The AWI team analyzed snow samples from Helgo-land, Bavaria, Bremen, the Swiss Alps, and the Arctic. The researchers found high concentrations of microplastic in samples collected at every site. “It’s readily apparent that the majority of the microplastic in the snow comes from the air,” said Dr. Bergmann.

This theory is also supported by past studies which confirmed that grains of pollen from the middle latitudes are transported by the air to the Arctic. These grains are roughly the same size as microplastic particles. In addition, dust from the Sahara is known to travel through the atmosphere, often floating for more than 2,000 miles to the northeast Atlantic.

The microplastic concentrations identified in the current study are considerably higher than those in previous research, such as in studies that measured microplastics in dust deposits. Study co-lead author Dr. Gunnar Gerdts explained that the discovery of much higher concentrations may be due to one of two reasons.

“First of all, snow is extremely efficient when it comes to washing microplastic out of the atmosphere. Secondly, it could be due to the infrared spectroscopy we used, which allowed us to detect even the smallest particles – down to a size of only 11 micrometers,” said Dr. Gerdts.

“We’ve automated and standardized the technique so as to rule out the errors that can creep in when manual analysis is used.” As a result of the accuracy of their method, the researchers have concluded that a major portion of the microplastic in Europe, and even more so in the Arctic, comes from the atmosphere and snow.