Mistletoe has a strategy to keep its host plant alive • Earth.com 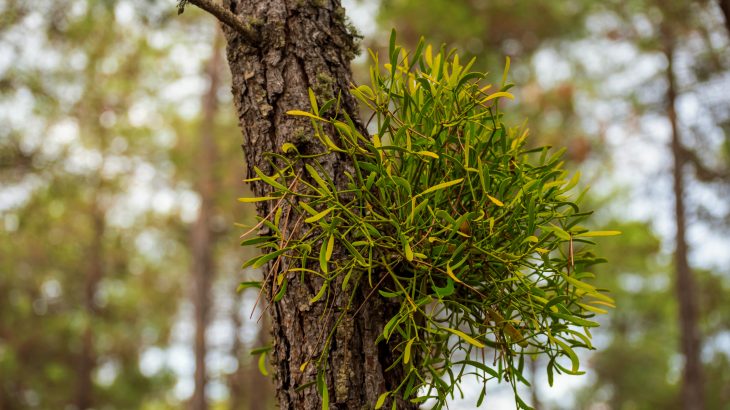 While mistletoe is capable of using photosynthesis to make food, this parasitic plant prefers to obtain water and nutrients from other trees and shrubs. According to a new study from UC Riverside, mistletoe uses an unusual feeding strategy to keep its host alive.

“Plants are autotrophic, they make their own food. Humans are heterotrophic, we eat it,” said study lead author Paul Nabity. “Mistletoe are mostly heterotrophic, but they can switch if they want to.”

The researchers discovered that when two mistletoe plants invade the same tree, they speed up the process of photosynthesis to obtain nutrients. This allows the plants to share the tree and minimize damage to it.

“They seem to know when they’re attacking the same host, and can reduce the virulence of their attack,” explained Nabity.

The Christmas mistletoe is a European species that invades apple trees and other hardwood trees in central California. The current study was focused on a native species of mistletoe found throughout the Sonoran and Mojave deserts that grows on acacia, palo verde, or mesquite trees.

The researchers experimented by removing one of two mistletoe plants from various trees. They found that mistletoe left behind on the tree did not increase photosynthesis, and reduced its water intake in some cases.

“It appears that the remaining mistletoe recognized it was no longer competing for resources,” said Nabity.

Birds often feed from a fruiting mistletoe and disperse seeds from the plant into the same host tree. The additional mistletoes increase the parasite load for the tree, yet the infection may not be as severe as it would be with the invasion of multiple unrelated plants.

Nabity explained that communication among mistletoes is possible through a variety of methods. For example, the parasitic plants are connected to a host’s xylem, the tissue that trees use to move water and nutrients from the roots, through which they may send messages. It is also possible the mistletoes may “smell” one another.

The chemical compounds produced by plants are released through the pores and then evaporate quickly into the air. The signals that the compounds carry can be received down wind.

Regardless of how mistletoes communicate, Nabity explained that they do not necessarily need to be removed from infected trees.  While the removal of mistletoe may improve the health of an individual tree, mistletoe plays an important role in supporting birds and pollinators. For example, mistletoe tends to flower in winter when nectar or pollen is not yet available from many other plants.

Nabity concluded that not only does mistletoe support other species, it may not hurt trees or shrubs as much as previously thought. “Don’t remove mistletoe because you think they’re all bad.”