Monkeys play an important role in bringing tropical forests back to life • Earth.com 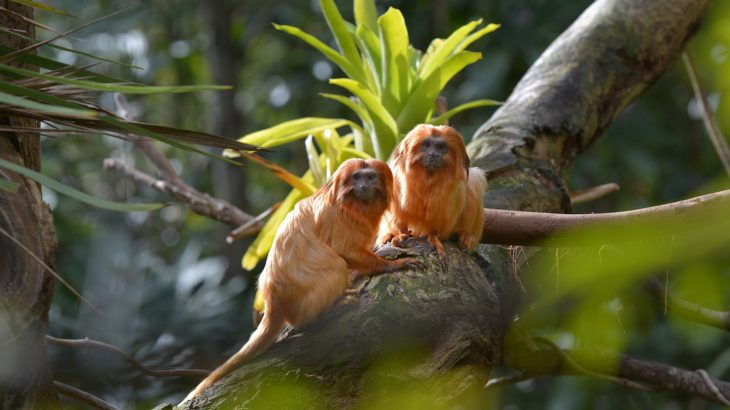 A team of scientists led by the German Primate Center (DPZ) has found that monkeys play a critical role in the regeneration of degraded tropical rainforests. For more than two decades, the researchers observed two tamarin species in the rainforest of Peru.

The study was focused on an area in the Peruvian Amazon rainforest which was cleared and used as pasture for water buffalos between 1990 and 2000. When the grazing was abandoned, the rainforest slowly began to regenerate. The researchers noted that moustached and black-fronted tamarins were temporarily in the early secondary forest.

“We wanted to find out whether the seed dispersal by monkeys has a demonstrable effect on the natural regeneration of forests,” said study lead author Eckhard W. Heymann.

After the tamarins feed on tropical fruits, the seeds are excreted in their waste rather than digested. To investigate which seeds were dispersed from the primary forest to the regenerating secondary forest, the researchers identified seeds from the monkeys’ feces.

A portion of these seeds germinated and the resulting seedlings belonged to eight different plant species, seven of which could only be found as adult plants in the nearby primary forest.

The seeds of the neotropic tree Parkia panurensis were exclusively dispersed by tamarins across the study area. To genetically confirm the significance of this seed dispersal, the team performed DNA tests to compare the new trees in the secondary forest to the adult Parkia trees. The tests revealed that half of the seedlings and young plants could be matched to parent trees in the primary forest.

“Our data show for the first time that the moustached and black-fronted tamarins effectively disperse seeds from primary forest into secondary forest,” said Heymann. “We were able to prove that the seeds germinate and form young plants, thus increasing the diversity of species in the secondary forest. The tamarins have been shown to contribute to the natural regeneration of areas destroyed by humans.”