Mother dinosaurs may have protected their nests in groups • Earth.com 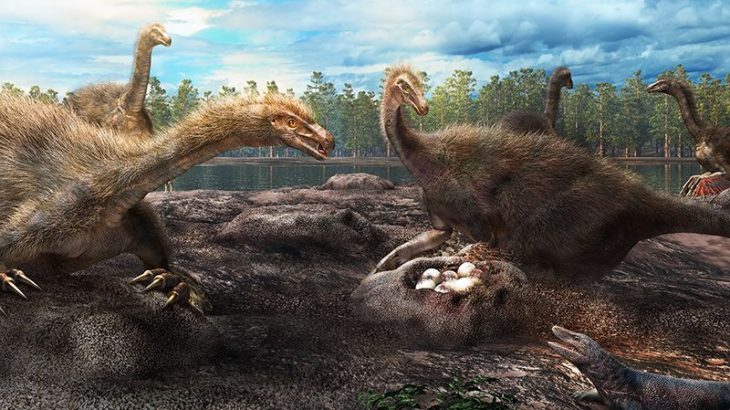 Mother dinosaurs may have protected their nests in groups

An 80-million-year-old dinosaur nesting site in the Gobi Desert of southeastern Mongolia has revealed that mothers worked in groups to protect their eggs just like some birds do today.

Study co-author François Therrien is an expert at the Royal Tyrrell Museum of Paleontology in Canada.

“Dinosaurs are often portrayed as solitary creatures that nested on their own, buried their eggs and then just went away,” said Therrien. “But here we show that some dinosaurs were much more gregarious. They came together and established a colony that they likely protected.”

The study was focused on the fossils of 15 nests and more than 50 eggs. The research has produced the strongest evidence to date that complex reproductive behaviors evolved before modern birds diverged from dinosaurs 66 million years ago.

Many paleontologists believe that this type of  “colonial nesting” was first used by dinosaurs to deter nest predators, but this theory had never been fully confirmed.

For decades, fossilized eggs and nests have been found clustered together. But according to study co-author Darla Zelenitsky, the surrounding rock often represents several thousand years or more, which makes it difficult for researchers to tell whether the eggs were laid at the same time or just in the same place.

In the newly-described nest site, however, the eggs appeared to have been laid during the same breeding season. A streak of bright red rock contains 15 clutches of relatively undisturbed eggs. “Geologically, I don’t think we could’ve asked for a better site,” said Zelenitsky.

Based on the exterior and interior textures of the eggs, as well as the shell thickness, the team concluded that they most likely belonged to a type of non-avian theropod.

The researchers estimated that over half of the nests had at least one successful hatch, which is comparable to the hatching success of modern birds and crocodiles that constantly monitor their nests in groups.

“Sometimes you can extract a fascinating and detailed story about the ecology and behaviour of these animals simply by looking at the rocks themselves,” said Therrien.