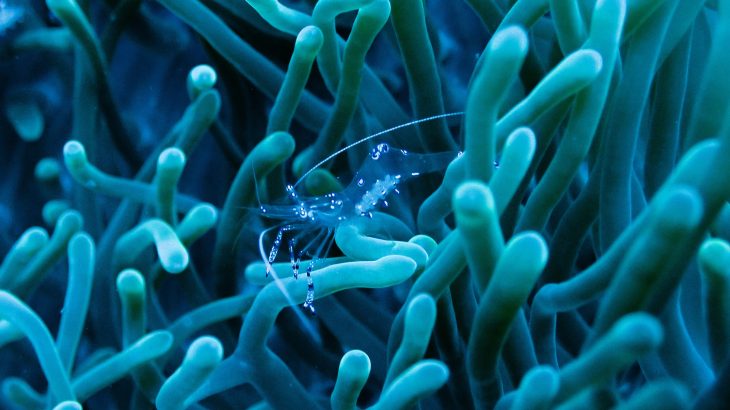 Some corals can handle the impacts of climate change better than others, and a new study suggests the secret weapon may be a natural sunscreen. Hawaiian blue rice corals contain a deep blue pigment that blocks the effects of harmful ultraviolet (UV) radiation from the sun.

While UV damage can impact reproduction in many coral species such as brown rice coral, the new research suggests that blue rice coral is not affected by heat stress in the same way.

“Having witnessed firsthand the devastating effects bleaching had on brown rice coral in 2014 and 2015, it is encouraging to see blue rice coral either recovered quickly after bleaching or was not affected by elevated ocean temperatures at all,” said study lead author Mike Henley if the Smithsonian National Zoological Park.

“By studying blue rice corals’ reproductive successes, we can better understand how other corals weather climate change and ocean warming.”

Coral polyps are actually transparent, and they get their color from the symbiotic algae that live inside of their tissue. This algae serves as the main source of food for reef-building corals such as brown rice coral and blue rice coral.

The tiny organisms, or zooxanthellae, provide the coral with food, and the corals return the favor by providing protection. The corals themselves cannot photosynthesize, but the zooxanthellae feed corals the waste products of their photosynthesis. In addition, the algae produce sunscreen for the coral.

When warmer ocean temperatures cause the corals to become stressed, the symbiotic relationship starts to break down. The algae experience higher metabolism and produce a toxic compound, causing the corals to expel them, along with their protective sunscreen.

The “bleaching” that takes place when corals lose their algae can affect reproductive success. This is because their DNA is at a greater risk of being damaged by UV radiation. Specifically, mitochondrial changes can affect the long-term motility of sperm cells, or their ability to swim.

Following bleaching events in Hawaii in 2014 and 2015, the team observed that blue rice coral had exceptional reproductive potential with 90 percent motility. Meanwhile, the brown rice coral had only half this amount of motility.

According to the study authors, this finding suggests that even if brown corals survive bleaching and look visually healthy, the damage caused by bleaching and UV exposure could have long-lasting impacts on their ability to successfully reproduce.

The researchers believe the blue rice coral’s ability to reproduce successfully may be its sunscreen pigment, which the coral may retain even if it bleaches.

By understanding how UV-blocking pigments help to mitigate the adverse effects of climate change, the scientists can explain why some coral species are better equipped to survive in a warming environment.