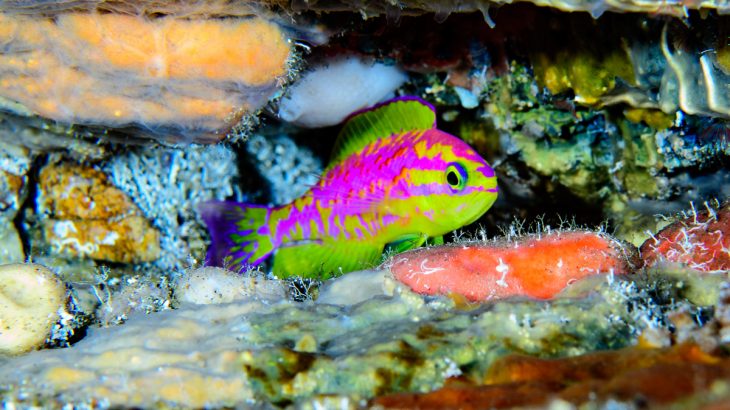 A striking new reef fish has been discovered near a remote chain of Brazilian islands known as St. Paul’s Rocks. The brightly-striped pink and yellow fish live about 400 feet below the surface in the rocky crevices of twilight zone reefs, and cannot be found anywhere else in the world.

During an underwater expedition led by the California Academy of Sciences, the deep-diving team was so captivated by the beauty of the unknown fish that they did not even notice a massive sixgill shark hovering above them.

Dr. Luiz Rocha is the Academy’s Curator of Fishes and co-leader of the Hope for Reefs initiative. “This is one of the most beautiful fishes I’ve ever seen,” said Dr. Rocha. “It was so enchanting it made us ignore everything around it.”

As Dr. Rocha and post-doctoral fellow Dr. Hudson Pinheiro collected some of the fish for further study, the ten-foot-long sixgill shark lingered overhead. Mauritius Bell, the team’s diving officer, caught the shark on camera as he attempted to alert the divers to its presence.

St. Paul’s Rocks are nearly 600 miles off the coast of Brazil in a region so remote that the diving team had to use the research vessel M/V Alucia as their homebase to explore the archipelago.

The new reef species was named Tosanoides aphrodite for its allure, in reference to the enchanting Greek goddess of love and beauty Aphrodite.

“Fishes from the twilight zone tend to be pink or reddish in color,” said Pinheiro. “Red light doesn’t penetrate to these dark depths, rendering the fishes invisible unless illuminated by a light like the one we carry while diving.”

Back in the lab, the experts noted that the males have alternating pink and yellow stripes while the females sport a solid, blood-orange color. DNA analysis revealed that the new species is the first member of its genus to dwell in the Atlantic Ocean. 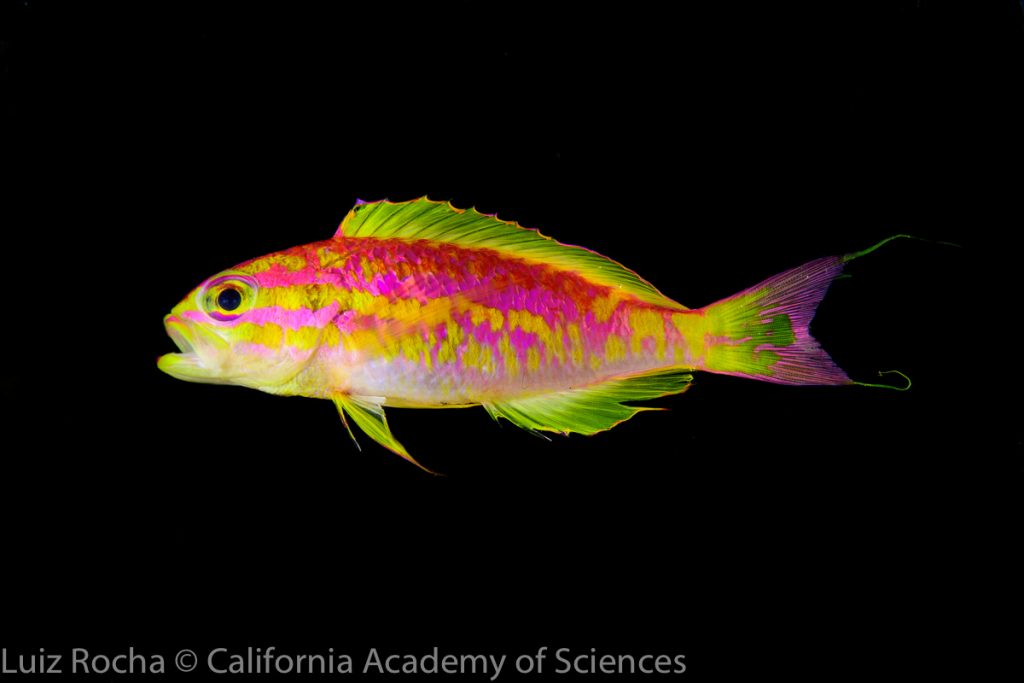 Dr. Rocha and Pinheiro are part of a deep-diving research team that explores twilight zone reefs, mysterious coral habitats located between 200 and 500 feet beneath the ocean’s surface. Animals live in these deep reefs in partial darkness.

The Academy team recently published a landmark study which revealed that twilight zone reefs are unique ecosystems that are full of life and are just as threatened by climate change as shallow reefs. The research contradicted the long-standing assumption that species may migrate between habitats to avoid human-related stressors.

“In a time of global crisis for coral reefs, learning more about unexplored reef habitats and their colorful residents is critical to our understanding of how to protect them,” said Dr. Rocha. “We aim to highlight the ocean’s vast and unexplored wonders and inspire a new generation of sustainability champions.”