New Guinea is the world's richest island for plants • Earth.com 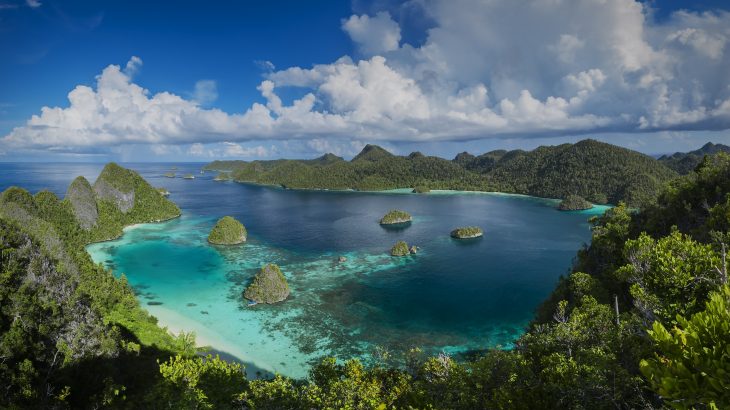 A new study has revealed that New Guinea has the most plant diversity of any island in the world. The discovery has been made by a team of experts including Professor Michael Sundue from the University of Vermont (UVM).

The researchers determined that 68 percent of New Guinea’s plants are not found anywhere else.

The number of vascular plants in New Guinea has been so uncertain that estimates have stretched from 9,000 to 25,000.

Professor Sundue and three other UVM plant scientists collaborated with an international team of researchers from 56 institutions to create the first-ever verified checklist of the vascular plants of New Guinea and its surrounding islands.

The scientists analyzed digital records and plant collections stored around the world, ultimately documenting a total of 13,634 species ranging from tiny orchids to massive tree ferns. High in the mountains of New Guinea, there are thousands more rare species still waiting to be found.

Professor Sundue is an expert on two types of ferns, but his goal is not to simply count and identify plants.

“The bigger question is where are biodiversity hotspots in the world – and why?” said Professor Sundue. “I’ve been trying to address that for ferns.” He explained that New Guinea has been a “black hole” for many plants including ferns.

“It’s remote, dangerous, hard to get to with almost no roads. You can’t just check an app or look at a museum collection – a lot of species have almost no records. So how are you supposed to interpret the evolution of plants on Earth – if you have missing pieces? You have to go there and collect.”

In his office, Professor Sundue admires a dried plant from New Guinea that looks like a fern but is technically is a lycophyte.

“Oh that’s sexy; that’s a Selaginella. I’m not an expert on this. No one else studies this group of plants. There’s no Selaginella expert on Earth – and there are 600 species worldwide.”

The professor explained that Selaginella is one of the most ancient surviving lineages of plants in existence.

In the 1700s, Swedish botanist Carl Linnaeus set out to catalog all the world’s plants and animals. He proposed that their origin was a high mountain in Paradise – an island on the equator that was revealed when the primeval waters started to subside.

Dr. Rodrigo Camara-Leret, lead author of the current study, said that if Linneaus was alive today he would choose New Guinea as his symbol of a Paradise island teeming with life.

New Guinea supports a remarkable variety of landscapes, such as mangroves, rainforests, and savannahs, that are home to some of the most well-preserved ecosystems on the planet. As a result of his research in New Guinea, Professor Sundue said it is clear to see that ferns are most diverse in tropical mountains, where they adapt to a range of habitats and climates.

Despite some recent advances in classifying New Guinea’s plants, publications have remained scattered because botanists mainly worked independently from each other.

“Great uncertainty remained as to how many plant species grew in New Guinea,” said Dr. Camara-Leret. “Effectively, compared to other areas, like Amazonia which had plant checklists recently published, New Guinea remained the ‘Last Unknown.'”

The team estimates that as many as 4,000 more plants have yet to be discovered and added to their checklist.

“The study also shows that we need to invest in training a large group of young and resident taxonomists in New Guinea,” said Professor Sundue.

“A checklist may not seem that interesting, but it’s foundational…Biologists are trying to put together the history of life on Earth and that is done by examining all of the constituent organisms that live here, not just the ones that are easy to find.”

Dr. Tim Utteridge of the Royal Botanic Gardens told BBC that identifying and naming plants in New Guinea is the first step toward conserving and protecting them.

“If we lose them, there’s no way we can restore them from anywhere else, because they’re just not found outside the island,” said Dr. Utteridge.”We have a real responsibility to conserve this unique plant life.”

The study authors emphasized the urgency of their research. “Land-use change is an increasing threat so more botanical exploration is therefore urgently needed if unknown species are to be collected before they disappear,” wrote the researchers.

To learn more fascinating facts about plants, head over to the PlantSnap blog!