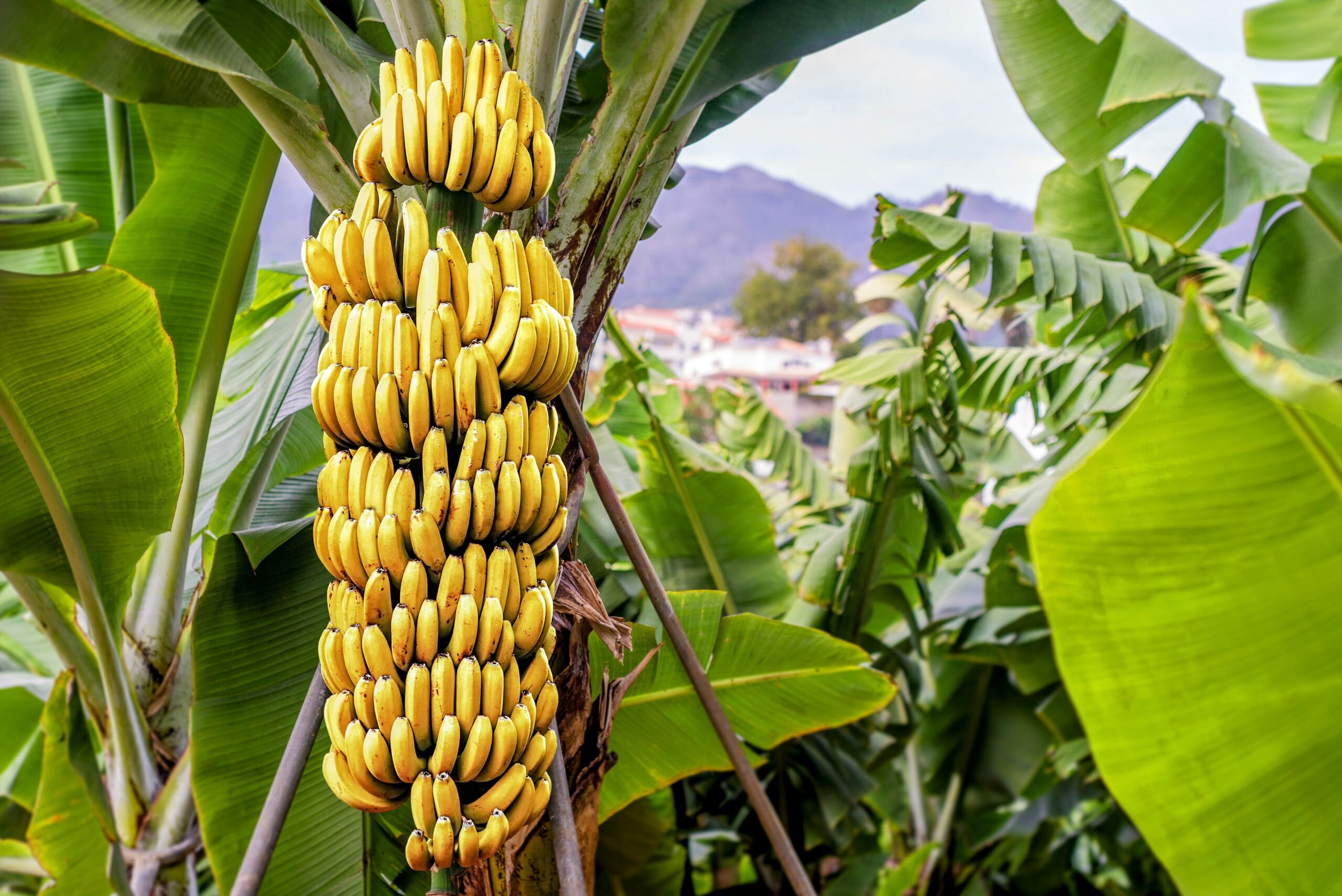 Panama disease is one of the most destructive plant diseases of modern times. It is caused by a fungal pathogen called Fusarium oxysporum cubense, and is also known as Fusarium wilt. It infects banana plants, causing the leaves to turn yellow and wilt, the corm to rot and the vessels to become blocked. Infected plants will invariably die. The fungus is easily spread in the form of hardy spores residing in the soil and also by the transplantation of young banana suckers that appear uninfected but do, in fact, already carry the fungus.

Bananas are one of the most important crops in the world. Over 100 million metric tons are produced in total each year, in more than 150 countries. Not only are they exported and consumed world-wide, but also they provide staple local food for almost half a billion people. They are thus an essential calorie crop and a revenue-generating trade commodity.

In the 1950s, a race of the same fungus (Fusarium oxysporum cubense Race 1) was responsible for an outbreak of Panama disease that almost wiped out commercial banana production around the world. At that time the ‘Gros Michel’ cultivar was the dominant variety of banana and was relied upon for almost all exports. In order to overcome the disaster, a new variety known as ‘Cavendish’ was introduced. This cultivar was not susceptible to the disease and soon replaced the Gros Michel bananas in terms of exports.

Unfortunately, by 1967, a new race of the fungus, known as Tropical Race 4 (TR4), was detected in Taiwan and proved infectious even to the Cavendish variety of banana plants. Since then TR4 has spread rapidly to continents across the world; it reached Africa by 2015 and, by August 2019, had arrived in Colombia in Latin America, a region famed for being the world’s biggest exporters of bananas. This aggressive fungus once again places banana production in jeopardy, threatening to inflict enormous costs on farmers and local people who depend on the fruit for income as well as nutritional value.

The new Panama disease threat is of particular significance as Cavendish bananas currently account for about 40 percent of world production and more than 90 percent of all exports. Normally the best method of controlling fungi on crops is to use fungicides but, so far, none of the usual chemical measures has shown much efficacy against TR4. In a systematic new study, reported in the journal PLOS Pathogens, University of Exeter scientists have now tested 21 fungicides of seven different types, in the hope of identifying a chemical agent that can control Panama disease.

Funded by the BBSRC Global Food Systems initiative (GFS), the team of researchers, led by Professor Steinberg and Professor Sarah Gurr, used a multi-disciplinary approach to improve their understanding of why the trusted fungicides did not appear to work on Panama disease. They tested the fungicides against TR4 spores and hyphae in laboratory cultures, as well as in infected banana corms and roots in the field. By combining expertise in cell and molecular biology, bioinformatics and plant pathology, the team revealed that all major classes of single-site fungicides do not work against this troublesome pathogen.

Their results did, however, provide insight about the molecular reason behind the “tolerance” of these fungicides exhibited by Fusarium TR4. Guided by this understanding, the research team tested seven different multi-site fungicides and discovered that some of this specialized class of anti-fungal chemistries, not previously used on bananas, are toxic to TR4 spores. Further tests using different concentrations of these potentially effective fungicides, and monitoring for possible negative outcomes on plant leaves and corms, revealed two types of fungicides that do protected bananas against TR4-induced Panama disease. They identify these substances as captan and three types of mono-alkyl lipophilic cations (MALCS).

This discovery opens new avenues to develop efficient control strategies and provides a significant step forwards in the fight to protect this valuable crop. Professor Steinberg, who led the molecular and cellular aspects of the work, said: “Bananas are Britain’s favorite fruit and Panama disease may ‘wipe’ them off the supermarket shelves. On top, millions of people in producer countries live on bananas. Providing an important step towards safeguarding bananas from Panama disease gives me great pride.”

“Our success is due to an enormous amount of dedicated work over several years with co-workers with hugely disparate skills,” said Professor Sarah Gurr, the plant pathology expert who led all work on banana infection and pathogen cultivation. “We are highly delighted and excited by the outcome of our work and by the glimmer of hope that the beloved banana may remain as part of our daily diet.”

Professor Dan Bebber, who was not involved in the study but heads the Exeter Global Food Security program, said: “This work has rather excitingly opened the door to development of safe and effective ways of protecting the UK’s favorite fruit by demonstrating good levels of disease control with lesser known antifungals. It also confirms that basic research has the potential to provide answers to pressing challenges in global food security.”