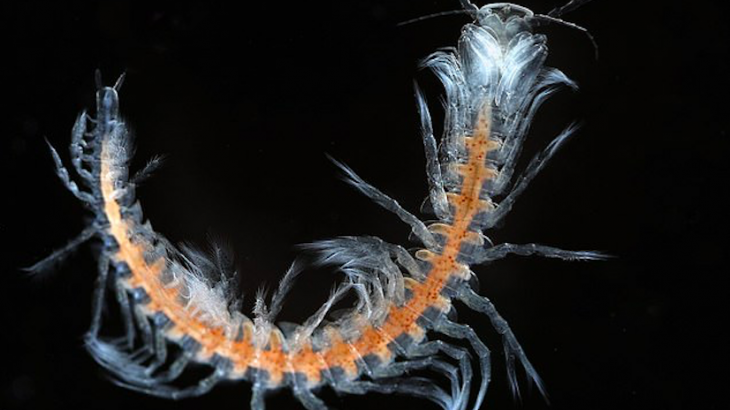 A 10-day research trip exploring caves in the Turks and Caicos Islands near the Bahamas has uncovered a potentially new species of remipede, a centipede-like crustacean known to inhabit extreme underwater environments.

The trip was led by Brett C. Gonzalez, a postdoctoral researcher at the Smithsonian, along with an international team of cave divers and marine biologists

Gonzalez was accompanied by Tom Iliffe, a professor at Texas A&M University at Galveston and an expert in underwater cave exploration.

Iliffe has explored over 1,500 underwater caves over his 40-year career and discovered more than 350 new species in the process, according to a Texas A&M report. Now, Iliffe can add another species to his roster as it’s thought that this latest research mission has shed light on at least one new species of remipede.

Remipedes are long with paddle-like limbs, and they are blind and colorless due to their dark habitats

“We collected what we believe is a new remipede species, likely related to those found in the Yucatan Peninsula of Mexico,” Iliffe told Texas A&M. “Other new species of cave and marine life will likely be found once further examination is complete.”

The goal of the research trip was to explore anchialine caves near the Turks and Caicos and collect specimens for future DNA sequencing in the hopes of better understanding how the rare species that live in the caves adapted and evolved.

Anchialine caves are landlocked caves that contain saltwater pools. Many blind and colorless species have been discovered in the extreme anchialine cave environments, and the species discovered resemble those that live in deep-sea ecosystems.

The researchers focused their efforts on scale worms and remipedes in the caves, both of which are top predators.

“I plan to use DNA sequencing technology to investigate similarities between these specimens and those living in the deep sea. This will aid us to understand how animals can adapt and live in such lightless, food poor habitats,” Gonzalez told Texas A&M. “Extreme environments like anchialine caves and the deep sea drive some scale worms into the water column, enabling them to survive as predatory swimmers.”

The researchers are working against the clock as many caves like the ones explored in this study are being polluted or destroyed leaving little trace of life behind.

“Time is critical and running out for this research,” Iliffe said. “Many of these caves are in danger of pollution or destruction. One cave in which we found a rich assortment of marine animals on our last trip here, is now polluted and lifeless. If we don’t obtain this information now, it may be lost to us forever.”