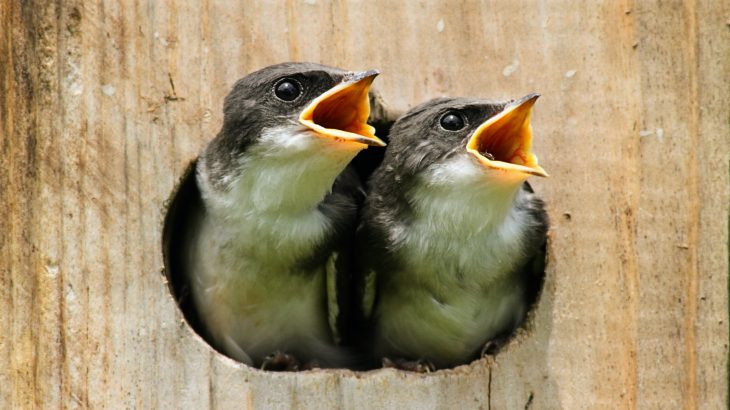 Noise from natural gas pipeline compressors does not deter birds from establishing nests nearby, but ultimately interferes with their reproductive success, according to experts at Penn State.

The researchers conducted an elaborate study that involved 80 new nest boxes occupied by Eastern bluebirds and tree swallows that were equipped with video cameras and recordings of compressor noise.

“Importantly, the birds did not preferentially select quiet boxes over noisy boxes, suggesting they do not recognize the reduction in habitat quality resulting from the noise,” said study co-author Professor Margaret Brittingham.

“But both bluebirds and tree swallows nesting in noisy boxes spent less time incubating their eggs, had fewer eggs hatch and produced fewer young than their neighbors nesting in quiet boxes.”

Natural gas production is rapidly expanding across the United States. Compressor stations that pressurize gas and push it through pipelines to consumers are often located in isolated areas of the forest used by breeding birds.

For their investigation, the researchers took precautions to make sure they were solely evaluating the responses of the birds to compressor noise, and not to other factors.

The experiment was conducted in the Russell E. Larson Agricultural Research Center at Rock Springs in central Pennsylvania.

The team positioned the nest boxes to attract bluebirds and tree swallows to a site with no previous breeding population. Half of the boxes were exposed to natural gas compressor noise before birds returned to the region, while the other 40 boxes served as controls.

“We took a risk initiating the study – we weren’t sure these birds would find and occupy our boxes,” said Professor Avery. “We hoped that, ‘if we build it, they will come.’ Bluebirds likely had other nearby spots to nest, and the tree swallows were just returning from Central America. There was no guarantee they’d encounter our boxes.”

She found that there was no difference in the number of eggs laid between noisy boxes and quiet boxes or in feeding behavior by the adults. However, in both species, Williams observed a reduction in incubation time, hatching success, and fledging success in the noisy boxes.

According to the researchers, the results indicate that natural gas infrastructure can create an “equal-preference ecological trap,” where birds do not distinguish between lower and higher quality territories despite reproductive costs.

“That suggests that noise did not increase rates of either depredation or abandonment but instead negatively impacted fitness through reduced hatching and fledging success,” said Professor Brittingham. “We never would have known that if we had not done this research.”

The study is published in the journal Ornithological Applications.