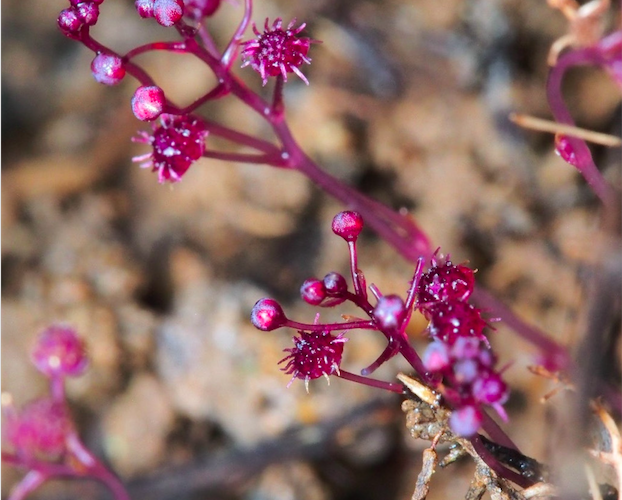 Some plant species attach to other plants and feed off of their roots instead of photosynthesizing. Fungi such as mushrooms and mold are most often hosts to these parasitic plants. On Ishigaki Island in Okinawa, Japan, a new species of non-photosynthesizing plant has been identified and named Sciaphila sugimotoi.

Non-photosynthesizing plant species, known as myco-heterotrophs, only emerge from under ground when flowering or bearing fruit. Many plants of this species are extremely small with short flowering periods, making them difficult to find and classify.

Professor Kenji Suetsugu of Kobe University, who is involved in documenting the distribution and classification of the mycoheterotrophic plants in Japan, led the team that recognized Sciaphila sugimotoi.

In October 2016, Professor Suetsugu was informed of a sighting of an unknown myco-heterotroph near Mount Omoto on Ishigaki Island. Professor Suetsugu meticulously investigated the morphological characteristics of the plant. The results showed that it was a relative of Sciaphila nana, which has three spherical nubs on the head of the male flower. The study revealed that the new species has six nubs.

Sciaphila sugimotoi is named after Mr. Takaomi Sugimoto of Kyushu University, who played a key role in the identification of the species. Specimens of S. sugimotoi collected by Mr. Sugimoto reveal that the plant stands 5-10 centimeters above ground with violet flowers that are roughly 2 millimeters in diameter.

Due to their parasitic nature, mycoheterotrophic plants need a healthy, stable ecosystem with abundant resources in order to thrive. The discovery of new mycoheterotrophic species suggests that a rich habitat resides beneath the forest floor. The existence of S. sugimotoi is further evidence of the value of the Mount Omoto area.

The findings of this study will be published on July 25 in Phytotaxa.