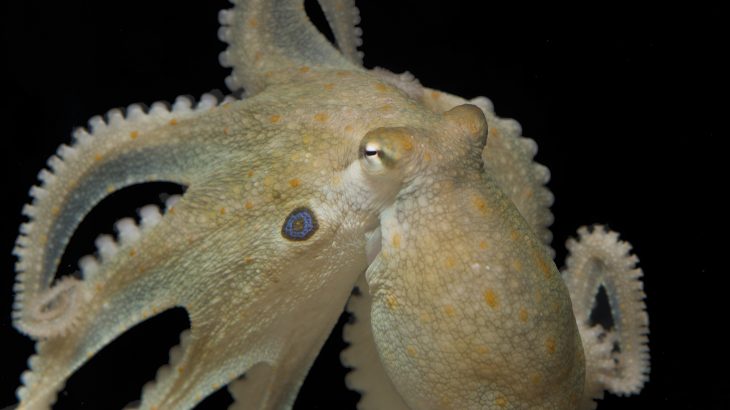 Even octopuses become more social when on MDMA, study shows

The popular party drug MDMA – also known as ecstasy – causes a rush of dopamine, serotonin, and oxytocin in those who take it, resulting in feelings of emotional closeness and euphoria. Individuals under the influence may be more willing to connect and share with other people that they would while sober. This is one of the many reasons why it’s so popular in the clubbing and rave scenes.

But how would octopuses react to MDMA – seems to be the question one group of researchers was brave enough to ask. Now, these researchers are reporting in Current Biology that a species of octopus considered to be largely solitary and asocial actually responds to MDMA in a similarly pro-social manner.

First author of the study, Eric Edsinger, chose to study Octopus bimaculoides because it is possible to breed them and study their behavior in the lab. Furthermore, it’s the only species of octopus to have its genome fully sequenced, allowing scientists to make comparisons between the genes in octopuses and those in humans.

“Despite anatomical differences between octopus and human brain, we’ve shown that there are molecular similarities in the serotonin transporter gene,” says Gul Dolen of Johns Hopkins University, stating that this gene encodes a transmembrane protein that serves as the primary binding site for MDMA. “These molecular similarities are sufficient to enable MDMA to induce prosocial behaviors in octopuses,” he adds.

When the researchers compared octopuses’ interest in other octopuses to their interest in novel objects under normal circumstances, they actually found that the octopuses had more interest in each other that previously thought – particularly in other females. And when they tested their interest in other individual while under the influence of MDMA, social behavior increased significantly. The octopuses spent more time with other individuals – including other males – while on MDMA, and also engaged in extensive exploratory ventral surface contact with one another.

While this study is interesting from a behavioral standpoint, it also shows a significant connection between human and octopus evolutionarily. Despite our distance from invertebrate species such as octopus on the evolutionary tree, we clearly share a common heritage that allows serotonin to have control over our social behaviors. The research team is now looking to sequence the genomes of two other species of octopus, and hope to gain more insight into the evolution of social behavior.