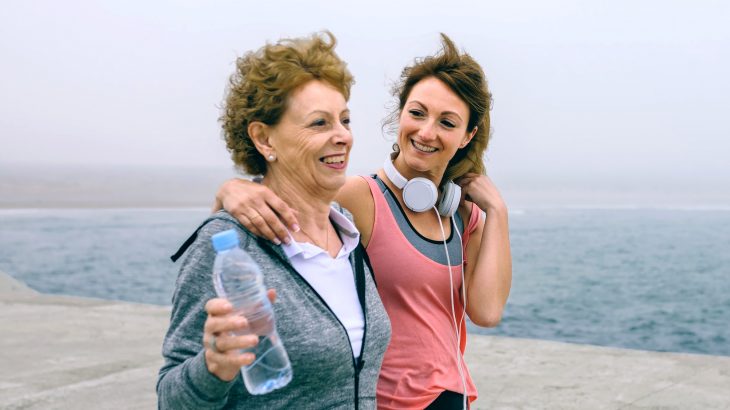 Although many adults strive to hit 10,000 steps per day, a new study from Brigham and Women’s Hospital has found that older women require fewer steps to maintain a healthy lifestyle.

By analyzing four-years’ worth of data collected from the Women’s Health Study, researchers found that those who took as few as 4,400 steps per day had a lower risk of death than those who only reached 2,700 steps per day.

Furthermore, risk of death decreased with more steps taken per day, but leveled off at around 7,500 steps per day — much less than the 10,000 steps many wearable step-monitoring devices encourage. These findings are published in JAMA Internal Medicine.

“Taking 10,000 steps a day can sound daunting. But we find that even a modest increase in steps taken is tied to significantly lower mortality in older women,” said I-Min Lee, MBBS, ScD, an epidemiologist in the Division of Preventive Medicine at Brigham. “Our study adds to a growing understanding of the importance of physical activity for health, clarifies the number of steps related to lower mortality and amplifies the message: Step more — even a little more is helpful.”

Lee and colleagues studied participants of the Women’s Health Study, originally conducted to evaluate risk of cardiovascular disease and cancer among women taking low-dose aspirin and vitamin E. After the initial study was completed, the participants were asked to participate in a long-term study regarding steps and health. 16,741 women averagely aged 72 agreed to wear an ActiGraph GT3X+ accelerometer device on their hips for seven straight days during all waking hours.

The team notes that this study has not identified a cause for the correlation, and is simply observational. They also note that the women involved in the study were primarily white and older, therefore further studies must be completed to diversify the findings.

“Of course, no single study stands alone. But our work continues to make the case for the importance of physical activity,” Lee said. “Clearly, even a modest number of steps was related to lower mortality rate among these older women. We hope these findings provide encouragement for individuals for whom 10,000 steps a day may seem unattainable.”