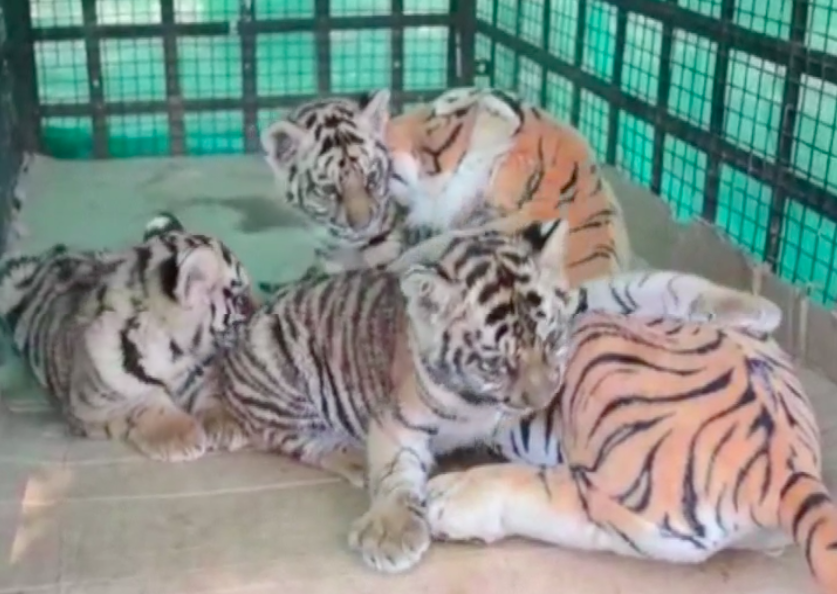 When three tiger cubs are suddenly orphaned and are suspicious of humans, how do you go about feeding them?

With a stuffed tiger toy, of course!  That’s what park rangers at India’s Bandhavharh Tiger Reserve did when they took in three tiny cubs last month. The cubs were in critical condition when they were found – and the situation only got worse when they refused to eat the food provided by human caretakers.

“We tried to give them goats’ milk initially but they didn’t like the human interaction. They just refused to take the bottle from our staff,” said Mridul Pathak, an employee at the reserve, said to AFP.

Their solution? Hide milk bottles inside a stuffed “mother” tigress. Much to their caretakers’ relief, the tiger cubs happily latched on and started feeding.

“Now they have been feeding from the synthetic nipples attached to the dummy for six days,” Pathak said. “Their energy levels increased from the first feed.”

While the rangers’ solution was a novel one for tigers, dummy “calves” are often placed near cows and buffaloes in India when they stop lactating. The closeness of a “little one” often encourages the mother to resume milk production to feed her real calves.

Mealtime wasn’t the only thing that forest rangers worked to make more authentic for the cubs. They also built a special enclosure filled with twigs, sand, and grass in order to make it feel like a natural tiger habitat. Caretakers even went the extra mile and rubbed real tiger feces on the stuffed toy, as well as in the grass in the enclosure. They hoped this would make the cubs feel more at home.

In January, the body of the cubs’ mother was found near a river. Rangers believe that she may have brushed against an electric fence guarding a nearby cattle farm.

More than half of the world’s tiger population lives in India, where their numbers are currently around 2,200. They are targets for poachers, however, and at least 98 tigers died last year.