Parasitic plants steal genetic material from their host to use against them • Earth.com 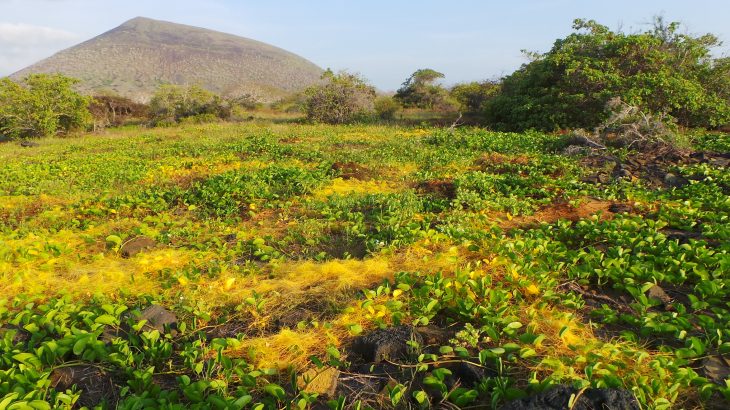 There are some parasitic plants that can steal genetic material from their host plants and use it to more effectively drain the host’s nutrients. According to a new study led by researchers at Penn State and Virginia Tech, the parasitic plant dodder has stolen over 100 functional genes.

“Horizontal gene transfer, the movement of genetic material from one organism into the genome of another species, is very common in microbes and is a major way that bacteria can acquire antibiotic resistance,” said study senior author Professor Claude dePamphilis.

Parasitic plants like dodder cannot produce their own energy through photosynthesis, but use structures called haustoria to break into a host plant’s supply of water and nutrients. Dodder wraps itself around one or more hosts and grows into the vascular tissue of the plants.

“Parasitic plants live very intimately in connection with their host, extracting nutrients,” said Professor dePamphilis. “But they also get genetic material in the process, and sometimes they incorporate that material into their genome. Previous studies focused on single transferred genes. Here, we used genome-scale datasets about gene expression to determine whether the large amount of genetic material coming over through horizontal gene transfer is actually being used.”

The research team identified 108 genes that have been added to dodder’s genome by horizontal gene transfer and now seem to be functional in the parasite. These genes were found to contribute to haustoria structure, defense responses, and amino acid metabolism. One gene found in the dodder genome produces small segments of RNA that are injected back into the host plant to weaken its defenses.

Eighteen of the stolen genes were found to be present in all dodder species, which indicates that these genes were originally obtained by dodder in its ancestral form.

“This is the first time any study has seen evidence that horizontal gene transfers occurred early in the evolution of a parasitic group,” said Professor dePamphilis. “In this case, 18 of these genes were present in the common ancestor of all the living dodder species, which may have contributed to successful spread of these parasites.”

“We’d love to know how extensive horizontal gene transfer really is. We looked at just one species of dodder, which is just one of over 4,000 species of parasitic plants. Does horizontal gene transfer of functional genes happen to the same extent in other species? Is it possible in non-parasitic plants? In other complex organisms? This may be the tip of the iceberg.”

The research was funded in part by the National Science Foundation and the United States and Department of Agriculture.