Peek-a-boo! Monkeys can recognize themselves in the mirror • Earth.com 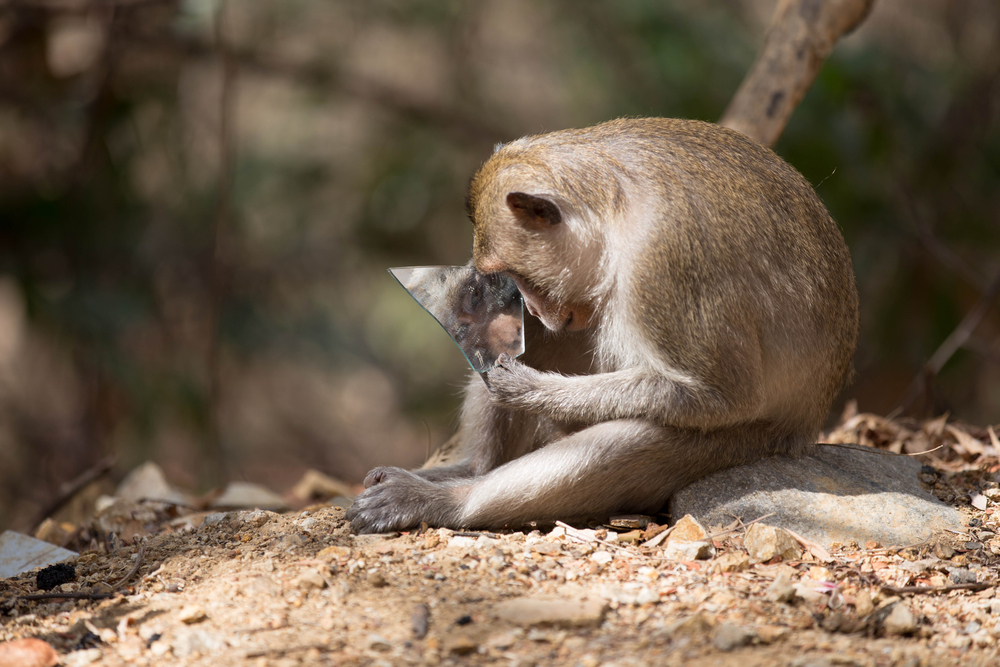 Peek-a-boo! Monkeys can recognize themselves in the mirror

Humans are simply obsessed with putting animals in front of the mirror. We dance around with our cats in order to show them their reflections. We laugh and film YouTube fodder when our puppy discovers its reflection for the first time and becomes adorably ferocious about it.

It seems that scientists are obsessed with showing animals their own reflections, as well. However, their experiments with nonhumans and reflective surfaces serve more of a purpose than creating viral videos. They’re actually learning about animals and self-awareness.

A recent study, for example, found that while rhesus monkeys can use a mirror to find food objects, they aren’t typically aware of their own reflections. This awareness is known as mirror self-recognition (MSR). Scientists wondered: if monkeys don’t naturally display MSR, is it a skill they can be taught?

To test this out, Mu-ming Poo, a neurobiologist at the Shanghai Institutes for Biological Sciences used laser pointers and mirrors to see if they could make the monkeys aware of their own reflections.

In the experiment, scientists placed the monkeys in specially-designed chairs in front of large mirrors. Devices with soft rubber balls attached were used to hold the monkeys’ heads in place so that they’d look towards the mirror. Then, the research team shined a laser pointer at different places: on the boards holding the chair contraption in place, as well as on the rubber balls.

Whenever the monkey touched the location of the light, they were rewarded with a tasty treat. After a few weeks of this kind of training, scientists expanded the possible locations of the laser light pinpoints to include the monkey’s face.

The monkeys continued to respond to the laser pointer, successfully locating the dot when it appeared on their faces. They all passed the standard face mark test for MSR and were able to perform the tasks both in the chair and when returned to their cages.

What does this test mean for monkey mirror recognition? “The monkey has to learn that the hand in the mirror is his own hand. And he has to learn how to control it precisely by watching it in the mirror,” Poo explained to the journal Science. “That’s the key.”

The findings were published in the Proceedings of the National Academy of Sciences.