Pink flamingos once thrived in the Australian outback • Earth.com 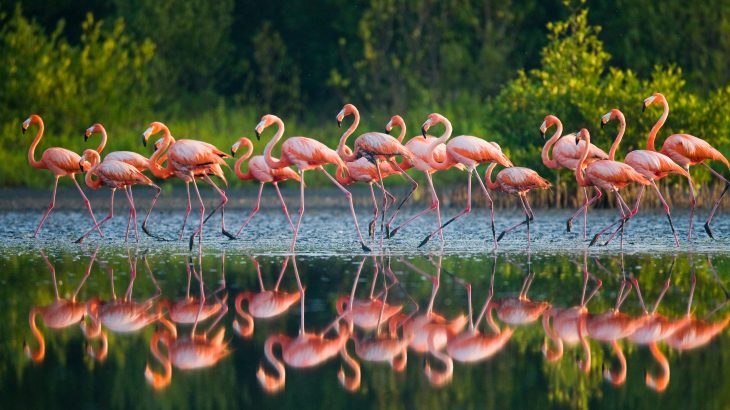 Pink flamingos once thrived in the Australian outback

For the first time in 35 years, a complete list of all fossil birds in Australia has been published. The review describes 95 bird species known from fossils, 78 of which are now extinct.

Among the Australian birds that have disappeared are three species of pink flamingos that thrived in the outback across lush green landscapes for about 25 million years.

According to the experts, some of the birds were much larger than the flamingos we see in Africa and other parts of the world today. When the inland lakes were wiped out by climate change about 140,000 years ago, the last of the Australian flamingos vanished.

Study co-author Professor Trevor Worthy is an expert in fossil birds of Australia and New Zealand at Flinders University.

“The once verdant interior of the country dried out during the last two Ice Ages,” explained Professor Worthy. “Feeding on tiny crustaceans, which gave them the familiar pink color, these birds evolved to live in shallow lakes and breed during the seasonal blooms of algae and zooplankton. But when all the lakes dried up, the flamingos were doomed.”

Australia currently has about 936 species of living birds. Prior to the study, the most recent checklist of Australian fossil birds was published in 1984.

The researchers pointed out that “our understanding of modern bird relationships has considerably transformed in the last two decades.”

“Here we provide a new checklist, which is a timely update of the taxonomy and systematic status of fossil birds so far recorded for Australia. The known fossil record of birds in Australia spans the Lower Cretaceous to the Holocene.”

Professor Worthy hopes the list will stimulate future study of ancient extinct birds. He noted that flamingos are just some of the bird diversity lost in Australia’s history.

“What we show is that there is much yet to learn about the evolution of Australia’s birds through more work on the fossils described so far,” said Professor Worthy.

“It shows we know very little about the evolution of important Australian groups such as raptors, pigeons, parrots and songbirds. In fact, there is much yet to learn about land birds generally.”

Study co-author Dr. Jacqueline Nguyen is an avian paleontologist at The Australian Museum.

“Our understanding of Australian birds is enriched by the fossil record, which offers a unique window into past bird diversity,” said Dr. Nguyen.

“This list covers the amazing range of fossil birds that once lived in Australia, such as flamingos and giant penguins, but it also reveals the gaps in our knowledge. We see it as a challenge to fill those gaps.”

The scientific review and checklist is published in the journal Transactions of the Royal Society of South Australia.