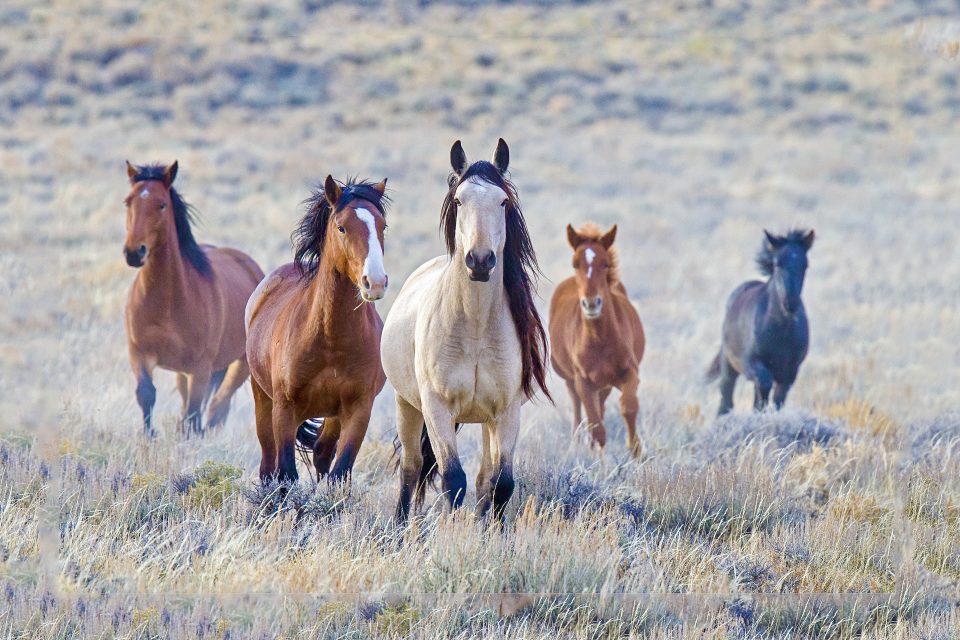 As I have previously reported, management of wild horses in the western United States is contentious, and views differ on what the ‘wildness’ of horses in North America means.

The native horses of North America died off long ago. Some see the European horses now released on the western US landscape as a return of a once eradicated wild animal. Others see wild horses as feral interlopers destructive to the fragile ecology of the arid west.

No matter how you see wild horses, it’s clear that they have been mismanaged by the Bureau of Land Management (BLM) for a long time at the cost of millions of taxpayer dollars. The BLM does have the difficult task of managing enormous amounts of horses over a vast landscape fraught with political tensions. National Geographic reports that in 2009, there were an estimated 37,000 wild horses and burros on land that should only support 27,000. There were at the same time 31,500 wild horses and burros in government holding pens.

The BLM reports that horse and burro populations have only grown. As of March 1, 2019, the on-range population estimate for wild horses and burros is 88,090 across all states. The appropriate management level is estimated to be 26,690 horses and burros federally.

Managing this number of horses is incredibly expensive. The BLM spent $81.226 million on managing wild horses for fiscal year 2018. Most of these horses and burros are removed from rangeland and placed indefinitely in holding pens. The animals are available for adoption but there are significantly more horses and burros captured annually than are adopted out.

Horse populations continue to rise unchecked and plans to sterilize horses were previously dropped by the BLM. Research even shows that the BLM’s removal of so many horses and burros probably drives up their population growth rates. Now, Congressional Quarterly reports that there is a serious conflict of interest involved in BLM’s wild horse management.

The House of Representatives passed the 2020 appropriations bill HR 3055 on June 25 approved of a plan to manage wild horses hashed out by different stakeholders. The plan was created by the Humane Society of the US (HSUS), the American Society for the Prevention of Cruelty to Animals (ASPCA), the National Cattlemen’s Beef Association (NCBA), and the American Mustang Foundation, among other state government and non-profit organizations.

The plan is called ‘10 years to AML: A Proposal for BLM’s Wild Horse and Burro Program’ and doesn’t seem to offer much that hasn’t been tried or suggested in the past. The plan calls for removing more horses from rangeland to “more cost-effective pasture facilities” and fertility control for up to 90% of free range mares. This includes moving many of the horses to private pastures, said to be less expensive than many of the facilities they’re now housed in.  These methods are promoted as an alternative to lethal population control methods. Despite the optimism of the plan, it has harsh critics.

“America was built on the backs of horses, and to remove these majestic steeds from federal lands, goes against the very core of equine protection…Animal groups should know better, and we’re appalled by their proposition…”

The American Wild Horse Campaign called the plan, “an irresponsible sell out of America’s wild horses and the 80 percent of Americans who want them protected in the wild.”

The plan is at best a compromise between different parties with very different goals in mind. On the one hand, it disallows selling animals to be slaughtered, a long held management tool, instead relying on broader marketing to increase adoption rates. On the other hand, the plan could potentially shrink the wild horse populations to tiny remnants.

All together, the plan seems like a humane way to remove the competition wild horses and burros represent to ranchers grazing livestock on public lands as well as native wildlife. Some wild horse advocates see this as an unacceptable compromise.

The future of the bill and how wild horses and burros will be managed is in the hands of the Senate now. Advocates of the bill asked for $50 million to implement the wild horse plan, the House appropriated $6 million for the Department of the Interior to begin implementing the plan. The Senate appropriations panel that oversees funding for the Department of the Interior. Lisa Murkowski of Alaska is the chairwoman of the panel and her chief clerk is Emy Lesofski, who is married to Drew Lesofski, head of the American Mustang Foundation.

Drew Lesofski is a lobbyist who formerly worked for Jim Gibbons, then governor of Nevada. Nevada is home to 60% of wild horses living on public land in the US. Critics point out that the Mustang Foundation would potentially benefit if the plan to relocate horses to private holding facilities prior to adoption, all at a cost of millions to taxpayers. This obviously sets the stage for a conflict of interest. The question remains what other options to public land managers have?

Critics of the current plan seem to call for an on range management plan, which makes sense if you consider the wild horse as a part of the western American ecosystem. The key to the success of the plan isn’t removing and adopting horses out, which seems very unlikely to grow enough to significantly reduce wild horse numbers. Instead, the fertility control is key.

According to the National Academy of Sciences, removing wild horses only causes populations to grow faster. The question becomes, why remove horses at all when they’re only likely to cost taxpayers millions to keep? The new plan claims that marketing to east coast horse owners will increase adoption rates but it’s hard to say they will increase significantly. In the meantime, horses will be kept in captivity costing money and resources but no longer competing with livestock for grazing land.