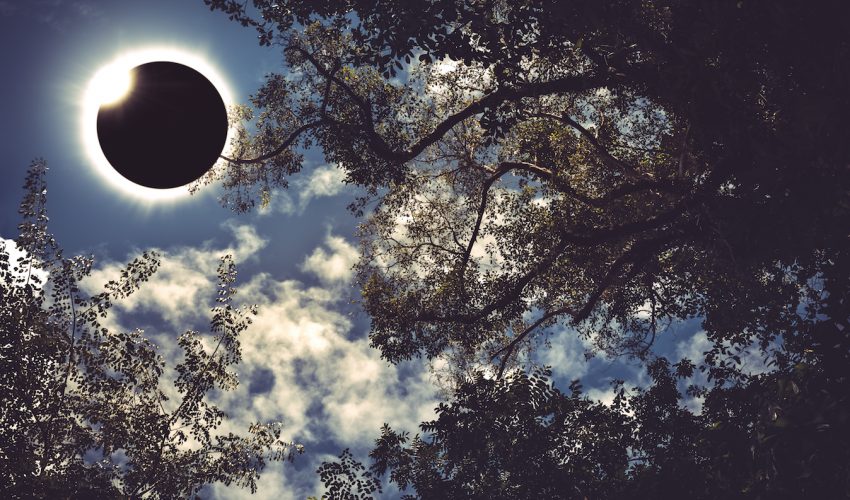 Earlier this year, a total eclipse could be viewed across the country inside of a 70-mile wide path that stretched from Oregon to South Carolina. The University of Missouri-Columbia was located directly in the path of totality, and researchers there took advantage of a rare opportunity to examine how a total eclipse affects plant life.

The light gradually decreased for 45 minutes during the event, and total darkness set in for 2 minutes and 36 seconds of total eclipse. Scientists at the college’s South Farm Research Center set out to see how plants would respond to the nighttime conditions including darkness and cooler temperatures.

“We were wondering if plants had a circadian rhythm–meaning that they have sensed when sunup and sundown are and have developed an internal clock, separate from sensing changes in light,” explained researcher Tim Reinbott. “So when we have totality of the eclipse in the middle of the day, would they even react?”

The team focused their study on four types of plants with different behavior including mimosa plants, which close their leaves at night and when they are touched.

The research team prepared three mimosa plants in advance of the eclipse. They were exposed to either 72 hours of light, 72 hours of darkness, or a regular light/dark cycle. The results of their experiment have left the researchers with many unanswered questions.

“The regular mimosa responded to the eclipse by closing up its leaves, just like at sundown,” said Reinbott. “But when we first exposed the mimosa plants to 72 hours of light or dark, they did not respond to the eclipse.”

Reinbott explained that this behavior may be attributed to changes in the light spectrum that are undetectable to humans.

“We have data that show slight differences in the light spectrum during totality and sundown,” said Reinbott. “Possibly those plants exposed to 72 hours of light or darkness lost some of their photoreceptors for one of these wavelengths (blue and red/far-red).”

The oxalis, which normally closes its leaves and folds its flowers at night, responded very differently to the eclipse. Due to the hot August temperature, the oxalis leaves were folded up to reduce sun exposure and retain water.

As the eclipse started, the oxalis leaves opened up, closing again when the daylight resumed. However, the plant did not fold its flowers at nightfall like it usually does.

“This shows that they have a circadian rhythm and were not fooled by the change in light from the eclipse. They only responded to the temperature change,” said Reinbott.

During the next total eclipse in 2024, the researchers plan to take a closer look at plants’ photosynthesis and water management. They will also examine the role of the light spectrum and what triggers the circadian rhythm in plants.