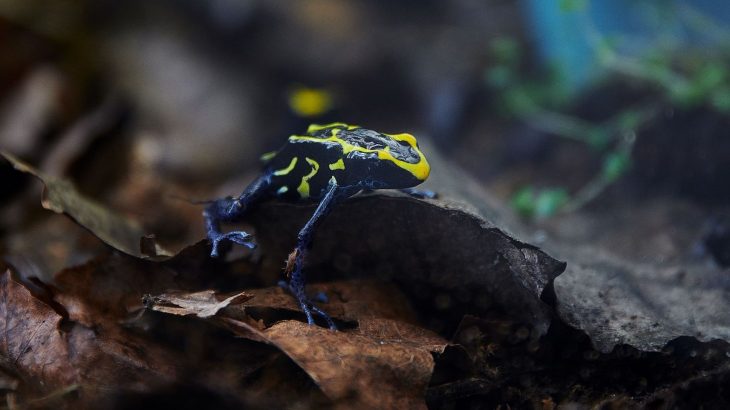 In French Guiana, Dyeing poison frogs ward off predators with their bold yellow stripes. This unique coloring signals toxicity, and there are many species in the animal kingdom that have evolved bright coloring as a warning.

Alongside the yellow frogs, there are Dyeing poison frogs with white stripes, a much less vivid and bold warning color.

Natural selection and evolution would suggest that the white coloring be weeded out in favor of the bolder yellow stripes, but a new study found that this is not the case.

Researchers from the University of Jyvaskylä in Finland, the University of Mississippi, the Centre National de la Recherche Scientifique (CNRS) in France, and John Carroll University investigated how the two types of poisonous frogs can co-exist and flourish side-by-side.

Because the frogs with the white stripes have rare and weaker warning coloring, the researchers needed to find an explanation for why diversity beats the odds in this case.

One factor in their survival is that predators first learned that yellow frogs are distasteful and poisonous and associate the same level of distastefulness to white frogs in the area. In other words, predators generalize what they know about one type of frog and apply it to the other kind of frog.

Generalized learning has allowed for the two types of genetically distinct frogs to co-exist.

With this study, the researchers were up against a challenge because they had to find a way to gauge a predator’s reaction to the frog’s toxicity or defense mechanism.

“We faced the difficulty of not having an established method to quantify predator reaction to the chemical defenses,” said Dr. Bibiana Rojas, a member of the research team. “However, that difficulty turned into one of the biggest assets of our study, as we eventually succeeded at developing a method.”

The researchers extracted toxins from the skin of Dyeing poison frogs and combined them with oats. By feeding the oats to the frog’s predators, the researchers could get a sense of how a predator chooses to spit out its prey based on distastefulness.

“The biggest surprise came from the fact that the frogs [with] higher amount of toxins in their skin are not necessarily the ones that birds find most distasteful,” said Rojas. “This finding challenges previous assumptions that most toxic equals most unpalatable.”