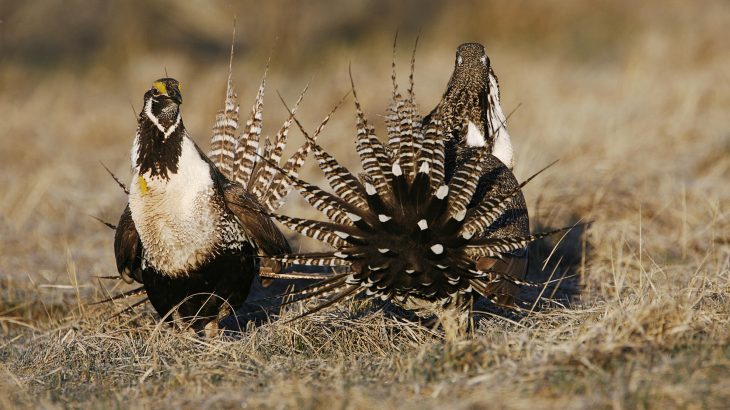 Years ago, I rose early and climbed into the cab of a truck with an employee of the Colorado Department of Wildlife (now known as the Colorado Department of Parks and Wildlife).  We drove from an office in Grand Junction Colorado up a winding road past desert spires and cliffs through Colorado National Monument. We left before the sun was up and I remember the air having a chill, even before we drove to higher elevation.

We spent the day driving and walking through a patchwork of government and private lands above the National Monument in a mix of open grass and sagebrush land bordered by forest.  We carried a large antenna looking much like the rooftop antennae that some may still use for television. The antenna was attached to a large box which beeped every so often. Pointing the antenna one way and then the other allows you to follow the louder beeps towards radio transmitters.  The radio transmitters we were tracking were attached to Sage Grouse, an animal with controversial protections.

The birds we were tracking were actually Gunnison Sage Grouse (Centrocercus minimus), an important distinction.  The Gunnison Sage Grouse is rarer, being about one third the size of Greater Sage Grouse, found historically in the four corners region of Utah, Colorado, Arizona and New Mexico.  According to US Fish and Wildlife Service, the grouse is now found only in Utah and Colorado with an overall population of about 5,000 breeding birds spread across seven populations, the largest population being 4,000 birds living in the Gunnison Basin where the bird gets its name.  Six of the seven populations are currently declining in numbers.

The Gunnison Sage Grouse is currently protected under the Endangered Species Act as ‘threatened’ and has been listed since 2014.  The distinction between Gunnison Sage Grouse and its cousin the Greater Sage Grouse (Centrocercus urophasianus) is relatively new.  It was only in the 1970s that scientists first noticed that the Gunnison Sage Grouse was different, and not until 2000 that the bird was officially recognized as a distinct species, based on a paper suggesting the idea that was published in 1995.

Being declared a separate species painted a new picture of sage grouse dynamics.  Two species means smaller populations of each, which makes each more vulnerable in the long run.  High Country News reported earlier this year that a new conservation agreement announced in April stopped lawsuits aimed at the US Fish & Game.  The plan continues to give greater protection to the Gunnison Sage Grouse while more data is gathered on the threatened bird. It’s obvious that there are fewer Gunnison Sage Grouse than their cousins the Greater Sage Grouse.

According to the Western Association of Fish & Wildlife Agencies (WAFA) the number of male Greater Sage Grouse at leks (areas where mating dance competitions occur) has increased by 63% since 2013.  This adds up to a total of a breeding population of Greater Sage Grouse of 424,645 individuals at known leks.  Unlike the Gunnison Sage Grouse, the Greater is spread across 11 western states, the population being more concentrated in Wyoming, Montana, Nevada, Idaho and Oregon than in Colorado and Utah.  The apparent abundance of the Greater Sage Grouse seemed to be a key to how it’s been managed by the Department of the Interior.

It’s important to put the Greater Sage Grouse numbers in perspective though.  The current range for the bird is about 165 million acres which is still a decline of 56% from the grouse’s original range.  All About Birds reported that a particular lek near a gas field in Wyoming, the number of male grouse declined from 184 in 2007 to just 43 in 2015.  Despite recent gains, the population has also declined by 30% since 1985. The grouse is perhaps a success in rebounding before it had to be listed on the Endangered Species List.

High Country News reports that on December 6 2018, the Bureau of Land Management (BLM) announced new plans for the management of the Greater Sage Grouse.  The new plans undo much of the 2015 agreement made under the Obama administration, allowing more oil and gas development in Greater Sage Grouse habitat.  Even before the plans were announced, Zinke’s Department of the Interior sold leases for oil and gas development in 720,000 acres of Greater Sage Grouse habitat.  This was land where grouse conservation was supposed to be prioritized under the original 2015 plan.

The Wildlife Society reported that as early as June, 2017 Secretary of the Interior Zinke had issued a secretarial order to revisit the original Greater Sage Grouse plan.  The order emphasized collaboration between the Department of the Interior and other agencies in assessing the economic impact of restricting oil and gas development in grouse habitat.  The prioritization of the oil and gas industry over habitat under Zinke is no surprise. The Secretary of the Interior, who recently announced he’s stepping down, has a cozy relationship with oil and gas and has pursued controversial oil and gas development, as I reported previously.  Zinke is also stepping down at let partially due to ethical breaches related to his relationship with the oil industry.  Others have also promoted profit over protection for the Greater Sage Grouse.

Representative Rob Bishop,  a Republican of Utah, submitted a rider in the 2019 National Defense Authorization Act (H.R. 5515) that would stop the USFWS from listing the greater sage-grouse on the Endangered Species Act for 10 years.  The rider was later stripped but Bishop has made other similar proposals in recent years. Unfortunately for the Greater Sage Grouse, Bishop has been speculated on as a possible replacement of Zinke as Secretary of the Interior.