Predatory lionfish have arrived in the South Atlantic • Earth.com 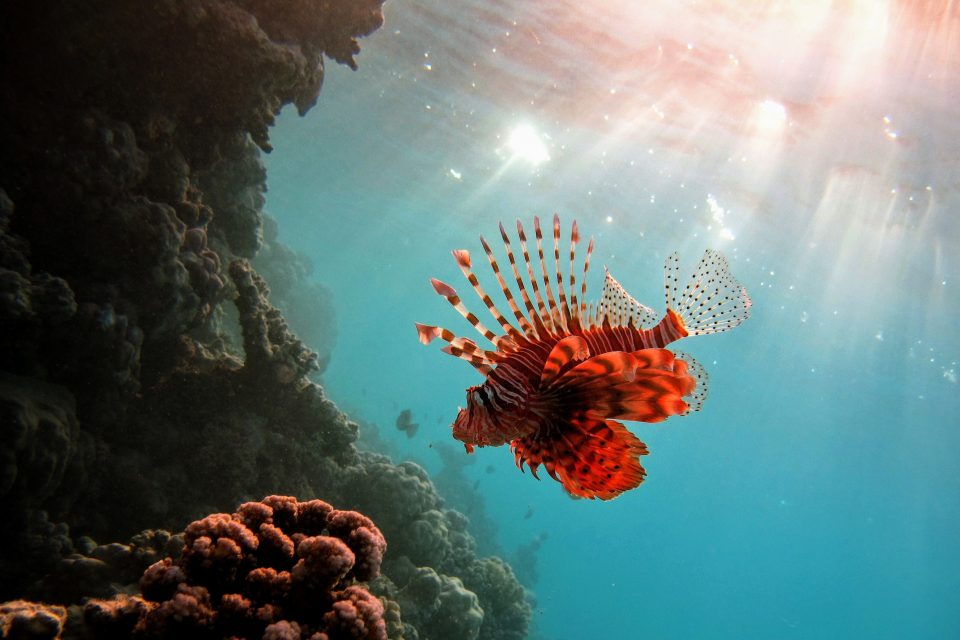 Predatory lionfish have arrived in the South Atlantic

A new study has confirmed that lionfish have invaded the South Atlantic Ocean off the coast of Brazil. An international team of experts led by the California Academy of Sciences warns that management of the predatory fish is critical to protecting Brazil’s coral reefs and marine biodiversity.

According to NOAA, a single lionfish residing on a coral reef can reduce recruitment of native reef fish by 79 percent. “Lionfish feed on prey normally consumed by snappers, groupers, and other commercially important native species. This means their presence could negatively affect the well-being of valuable commercial and recreational fisheries,” reports NOAA.

Less than 30 years after arriving in the northern Atlantic Ocean, lionfish have expanded at astonishing speeds to become one of the most widespread and destructive invasive species. They have negatively impacted coral reefs and other marine ecosystems from the northeast coast of the United States to the Caribbean Islands.

“For a while it was uncertain whether or not lionfish would extend into the South Atlantic,” said study co-author Luiz Rocha. “Now that we know they are here, it is imperative that we uncover how they arrived and work with local communities to keep the population under control.”

“If left unchecked, lionfish could have a huge impact on local species, particularly those that exist solely in the reefs surrounding Brazil’s oceanic islands.”

Lionfish have maroon stripes and more than a dozen venomous spines. They are native to the tropical waters of the South Pacific and Indian Oceans, but are very popular in the aquarium trade. It is likely that aquarium releases are responsible for the lionfish invasion in the Atlantic Ocean.

Lionfish have expanded faster than any other invasive marine species. The researchers explain that the capacity to spread is due to their broad diet, lack of natural predators, unique hunting style, and year-round reproduction of eggs that can travel long distances on ocean currents.

Up until 2015, when a local diver photographed a lionfish swimming off the southern coast of Brazil, the predators remained noticeably absent in the South Atlantic.

After the researchers were alerted to the sighting, they enlisted the help of local fishermen and divers to track down the initial specimen along with three additional lionfish in Brazil’s waters.

“The arrival of lionfish to Brazil’s oceanic islands is especially worrying,” said study co-author Clara Buck. “These unique ecosystems have a high number of endemic species found nowhere else on Earth making them much more sensitive to adverse impacts.”

To stop the invasion before it ramps up, scientists must determine how the lionfish are arriving in the region in the first place. Regardless of how they arrived, however, the researchers are urging the Brazilian government and local communities to stem the invasion.

The experts say that keeping population numbers low could buy precious time for species to adapt to the voracious fish and ultimately avoid predation. Local fishermen and divers, such as those who assisted with this study, will play a critical role in managing the invasion.

“Brazil, and Fernando de Noronha in particular, have robust local diving and fishing communities,” said Rocha. “If we put the right tools in their hands, it is absolutely possible to keep the invasion under control.”