Pristine coral reefs have been invaded by microplastics • Earth.com 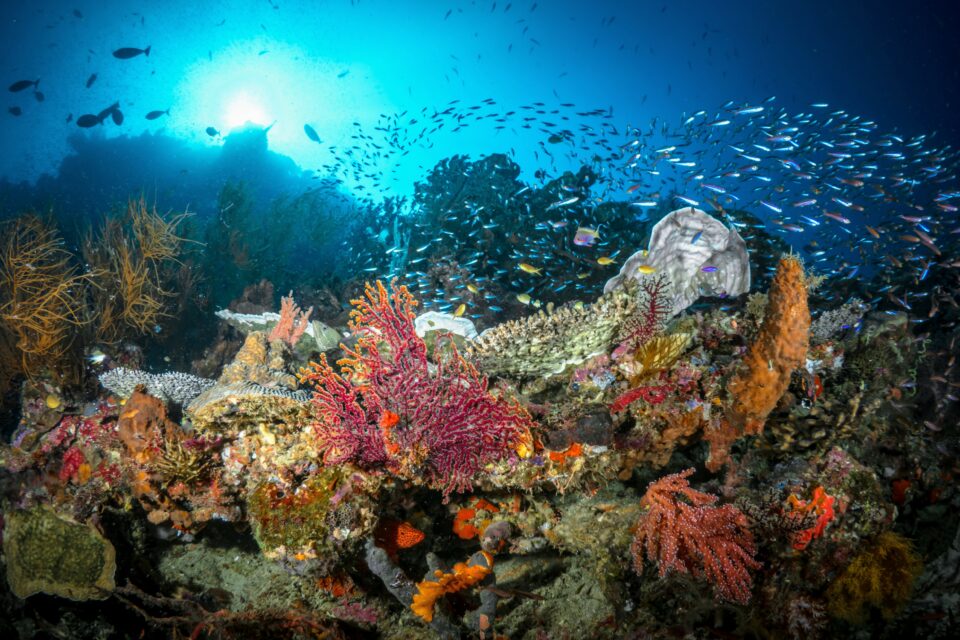 Plastic pollution in the world’s oceans has increased exponentially in the past few decades and has become one of the most serious threats to marine organisms. Because plastics don’t decompose naturally, they can persist for long time periods and accumulate in marine environments. It is estimated that between 4.8 and 12.7 million tons of plastic waste enters the oceans each year, and either sinks to the bottom or remains suspended in the water column. Currents carry the plastics along and distribute them far and wide.

Just how widely dispersed these plastics are, was brought home by researchers from the Centre Scientifique de Monaco and the International Coral Reef Center, Republic of Palau, in a recent study published in the journal PLOS ONE. The researchers wondered whether microplastics were present on and around the islands of the Palau Archipelago, a series of about 340 islands in the northwestern Pacific Ocean. This archipelago is remote and far from most urban locations and pollution sources, and it boasts some of the most pristine coral reefs in the world.

Coral reefs are biodiverse habitats that act as nursery, breeding and feeding grounds for a variety of marine organisms. They also support human activities, such as food provision and tourism. However, coral reefs are already under threat from global climate change that has brought ocean warming and acidification. Plastic contamination would certainly be an additional stressor to these fragile ecosystems.

The researchers chose five study sites at different locations around the archipelago. Their aim was to investigate pollution by microplastics and microfibers in the beaches, reef sediments and seawater of the major islands of Palau. They used simple sampling methods to demonstrate that such research can be carried out without complicated or sophisticated technology.

Microplastics are particles of plastic less than 5mm in size and they pollute the marine environment either as primary microplastics (microfibers from clothing, microbeads or plastic pellets), or as secondary microplastics that have formed from the degradation of larger pieces of plastic by physical abrasion or photochemical oxidation. Microplastics can be ingested by marine organisms that may suffer injury, gut blockage, starvation and mortality as a consequence.

The researchers used zooplankton trawl nets with a very fine mesh size to drag through the water at a depth of 10cm at each site. The nets were washed carefully while on board and the samples transferred to bottles. Once back at the laboratory the samples were passed through filter paper and dried before being weighed.

Subsurface sediment samples from the coral reefs were collected by SCUBA divers who scraped up the top 5cm of sediment from sample sites at a depth of around 13 meters. Similarly, the top 5cm of sand was scraped up from sample sites at the beaches. The samples were filtered and treated with chemicals to separate the plastics from the sediment. The microplastics were then dyed with an orange dye and counted using a microscope.

The researchers found that microplastics and microfibers were present in all the samples they analyzed. Far from being protected by their relative isolation, the Palau islands harbored plastic pollution in their reefs, beaches and surrounding seawater. In seawater, the abundance of microplastics ranged from 0.01–0.09 particles per liter, while in beach sand there were 0.17–0.34 particles per gram. Analysis of the reef sediments revealed the presence of between 6 and 12 plastic particles per gram, which was greater than the microplastic abundance in the other two habitats.

The researchers were also surprised to find the presence of nanoplastic particles in all their samples. The nanoplastics were more abundant than the microplastics, representing between 54.9 and 96.1 percent of each sample analyzed. This was despite the fact that the equipment used was not designed to trap nanoplastic particles and so their abundance would have been greatly underestimated.

These findings indicate that pollution from microplastics and microfibers is ubiquitous in marine environments and that pristine reefs in remote areas are not protected from this phenomenon. The researchers state that microplastic pollution of ecosystems depends more upon the movement of water currents than on proximity to anthropogenic activities. They expect that microplastics are likely to affect the health of sediment-dwelling organisms as well as filter feeders such as corals.

“Plastic pollution in the reef waters and sediments of Palau, which is not a hotspot of human activity, needs to be considered in future studies, especially during heat waves which, in combination with plastic pollution, can particularly affect coral reef organisms,” wrote the researchers.