The battle to protect historic Chaco Canyon from fracking and drilling • Earth.com 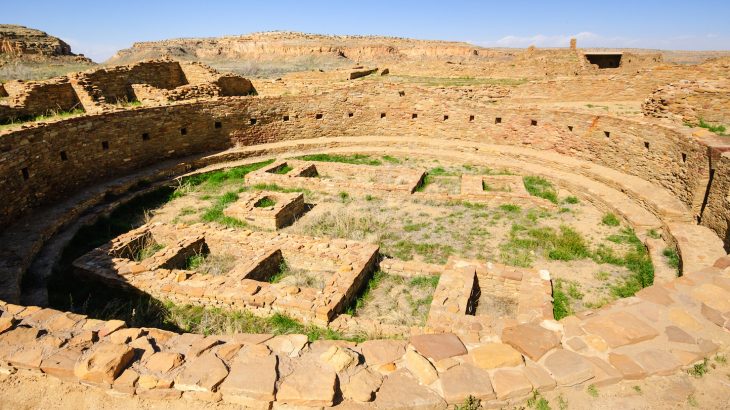 The battle to protect historic Chaco Canyon from fracking and drilling

Chaco Culture National Historical Park is a place of immense cultural and historic importance. Chaco is also a place of beauty and wildlife. Elk and coyotes can be seen from within the crumbling walls of ancient ruins. Hiking trails can take you to delicately chipped petroglyphs in canyon walls. Chaco is even considered a sacred place to Pueblo and Navajo communities. Unfortunately, Chaco’s environment is also under threat by federal land managers and mineral development.

The US Bureau of Land Management (BLM) has a history of issuing permits for oil drilling in the area around Chaco. High Country News reported in February that although 34,000 acres of land are protected by Chaco Culture National Historical Park, the majority of the greater Chaco area has been leased for oil and gas development by the federal government. Taos News reported in May that Stephanie Garcia Richard, the New Mexico Commissioner of Public Lands, signed an executive order creating a moratorium for drilling on state lands near Chaco. That move takes 73,000 acres off the table for drilling but it does nothing to stop the Bureau of Land Management from continuing drilling on federal lands in the region.

CPR reported earlier this year that New Mexico’s House Delegation has been seeking a stop to federal oil and gas leasing within a 10 mile buffer surrounding Chaco Culture National Historical Park but is unlikely to succeed. The act may be more symbolic than substantive, instead sending a message to the Trump administration. The proposed buffer would include a mix of federal, state and tribal land and so would require a sign off by tribal authorities as well.

The federal government itself has been inconsistent with its approach to Chaco. High Country News reported in February that the Trump administration had put parcels of land next to Chaco Culture National Historical Park up for lease only to remove them three times, almost as if taunting environmentalists and Native American groups. A lot of the decisions on drilling in the area are based around the BLM’s Farmington field office’s 2003 resource management plan for the San Juan Basin.

The 2003 plan was for vertical drilling, not the more horizontal ‘fracking’ which involves fracturing rock with the injection of water to release more oil and gas deposits. Fracking has been criticized for contaminating water, an essential resource everywhere but one in especially short supply in arid regions like Chaco.

Last year when I visited Chaco, the park’s water supply had broken down and bottled water was offered for free to visitors, a reminder that this is the desert. Water used in fracking is poisoned with hydrocarbons, fracking chemicals and other non-potable minerals. Because the 2003 plan didn’t take into account fracking, the BLM started a multiple year process to amend the old plan in 2014.

In the meantime, the BLM has continued to issue new drilling leases despite calls from environmentalists and Native American groups to wait until the new plan is in place. This amounted to leases of 50,000 acres and more than 500 permits within ten years. In response, four environmental organizations sued the BLM, claiming that their 2003 plan didn’t take into account the effect of horizontal fracking wells. It’s projected that fracking in the area could use as much as 3 billion gallons of water if the BLM plans go ahead.

The BLM won twice before a court of appeals sided with the environmentalists on one issue. High Country News reports that on May 7, a court of appeals found that the BLM didn’t take into account the environmental impact of the amount of water used by fracking. Despite this, the BLM is continuing to issue permits and leases, in defiance of the court.

The issue goes much further than water or fracking, though. CPR reported the Trump administration is attempting to roll back 2016 EPA rules that require oil and gas companies to reduce the flaring of methane. In response to this attempt of cutting restrictions, New Mexico has started planning its own methane restrictions. The state also gave new power to regulators to issue fines and citations. Meanwhile, the BLM continues with its planning process and continues to issue leases.

Archaeological surveys, consultation with tribal leaders, and a conversation with the Bureau of Indian Affairs are all part of the BLM’s process to create a new drilling management plan for the area. As we’ve seen in other cases such as Standing Rock, following the letter of the law often leaves local people disenfranchised for the profit of big business, especially when the locals are historically oppressed native peoples.

Native American leadership seem frustrated and feel that not enough is being done to protect important cultural sites. This is part of a greater push to drill on sensitive public lands with little regard to other issues under the Trump administration.

According to Reuters, in 2018 the federal government approved nearly 40% more permits to drill for oil and gas on public land than were issued in 2017. The increase in permits is partly due to a new automated system created near the end of Obama’s time as president that reduced a backlog in permitting. But Trump has also made it a goal to speed up permitting and reduce restrictions faced by oil and gas companies. The speed up of the permitting process however, was well underway under the Obama administration, when the BLM made it a goal to streamline the inefficient permitting process. Environmentalists fear that this faster process falls short on allowing public input as to areas where permits are to be issued.

Last year, I reported on a lease to drill near in the Sangre de Cristo mountains in Colorado, another place sacred to Native Americans and another place of stunning beauty. The same issues are at stake in Chaco as in the Sangre de Cristo mountains. It seems a cultural war is being carried out between those who value land as sacred and of intrinsic worth and those who see land as simply a resource to be utilized. Unfortunately in the eyes of the government, the land is simply a thing to be used.